Like him or loathe him (and opinion is evenly divided) the enfant terrible of Quebec cinema Xavier Dolan, 25, pursues a singular vision.

As the third Canadian entry in the Competition (after Atom Egoyan and David Cronenberg) he returns to the mother and son themes of earlier film I Killed My Mother.

Here the maternal force is Diane (played by Anne Dorval in a remarkably sustained performance). She has custody of her volatile son Steve (Antoine-Olivier Pilon with the look of an angel one moment and the Devil the next). He has been diagnosed with attention deficit hyperactivity disorder leading to severe behavioural difficulties and outbursts of violence.

Into their lives for the better comes Kyla (Suzanne Clément) who lives across the street and has a breakdown-induced stutter. How these lost souls come together and support each other forms the kernel of the film.

Dolan allows himself the idiosyncrasy of filming most of it in a square ratio before opening out to widescreen at certain moments of emotional release, a trick that proves irritating rather than dramatically satisfying.

It’s also self-indulgently overlong (a trait shared by several Competition films) but despite this, the energy and sheer visual bravura carry it along on a wave of emotionally truthful performances, with narrative twists of considerable ingenuity.

Whatever else Dolan has achieved in his short but prodigious career, he has defined a style and body of work that is recognisably his own. 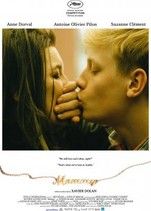 A widowed single mother, raising her violent son alone, finds new hope when a mysterious neighbor insinuates herself into their household.