Another day, another music documentary - but the story of Mathangi Arulpragasam, known to friends as Maya and to the world as MIA, is very different from most, and so is this film. Made with the co-operation of the star but without her full approval, it will be of interest to fans and critics alike. It also has a lot to offer to a more general audience, partly because of the breadth of the issues it covers and partly because of its subject's sheer force of personality.

Captured in archive footage that stretches back over decades, Maya is one of those people who seems to have been born with the volume turned up. It's a quality that no doubt helped her to survive a childhood in which she became a refugee, moving from Sri Lanka to Tamil Nadu and then to London whilst her father engaged in high risk political activism. She describes a pivotal moment when, living on a housing estate where her possessions were stolen by neighbours she felt powerless to stop, she spent her first night without her radio on and overheard music from an adjoining flat. It was the beginning of an awakening that would see her combine raw musical talent with well-nourished anger and a developing political voice - one that, when she visited Sri Lanka again, she came to feel she ad to use on the part of the globally voiceless Tamil minority.

Ask people for their opinions on MIA and the word 'talent' emerges quickly, followed not long afterwards by the word 'problematic'. Both these qualities come through in a film that does a good job of explicating the various controversies without being judgemental. It's impossible to deny the naivety of of some of Maya's early political work, but this is not to say that her arguments were necessarily wrong, rather that she didn't know how to present them in a way that people in power would acknowledge and understand. Her understandable frustration at being dismissed because of her youth only made this worse, as did the culture gap that is so often difficult to navigate when somebody with lived experience of poverty tries to talk about it to people who have no real conception of what it means to be hungry or afraid for one's physical safety.

Like many working class artists, Maya went on to be called a traitor for acquiring money, to be told that she had lost her authenticity - another classic way of silencing those with intimate knowledge of poverty. Although Maya is highly articulate in discussing this and how it made her feel, it's plain that she has done all her thinking alone, with no political theory to fall back on, leading her to feel besieged as she tries to assert what are to her obvious truths. Given that, it's no surprise that she has been interpreted in ways she fiercely contests, called a terrorist sympathiser and worse. This political turbulence makes attacks on her for making a rude gesture whilst performing at the Superbowl seem all the more absurd. Her description of what is expected of female performers there - even supposedly powerful women like Madonna - is wince-inducing and easily explains why she might have felt a bit put out.

Whatever else she may be, Maya clearly has no tolerance for bullshit - she seems constitutionally incapable of playing the game. It's not stupidity, though one can see why people have interpreted it that way. She has a searing honesty that's bound to make people uncomfortable and, captured as it is here, it seems to have had the same effect on her.

Steve Loveridge's documentary is equally unflinching. The archive footage used is deftly edited and we seem always to be in motion; the camera travels from one place to another, rarely stopping to rest, and there are always people moving about. Maya frequently positions herself with her face a little too close to the lens, pushing into the viewer's personal space. Even when she's in the background, there's some quality about her that makes her stand out. The film is energetic and uncomfortable and acutely personal, and whether she likes it or not, it will do its bit to raise the volume of her voice. 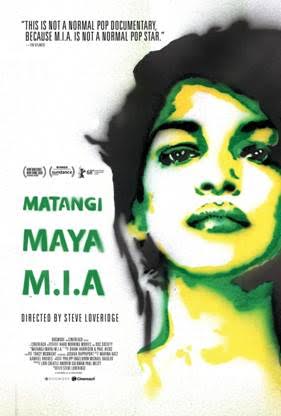 Drawn from a never before seen cache of personal footage spanning decades, this is an intimate portrait of the Sri Lankan artist and musician who continues to shatter conventions.