Made On The Rooftop

It begins with a break-up. Ha-neul (Lee Hong-nae) is arguing with his shy boyfriend Jeong-min (Kang Jung-woo), and not for the first time. It’s a pretty one-way process. Jeong-min attempts to remedy the situation and Ha-neul makes increasingly bitchy remarks until eventually Jeong-min surrenders. Stomping out of their shared home, Ha-neul heads to a café to meet his best friend, Bong-sik (Jung Hwi), a rising social media star whose natural prettiness is overwhelmed by a cacophonic wardrobe and elaborate coiffure. They make an odd pair, but they both know how this works. Ha-neul will whine for a few hours or days, Bong-sik will pretend to listen, and then the troubled couple will get back together again. In the meantime, they’ll hang out on Bong-sik’s rooftop and he’ll get some drama for his vlog.

This is how it has always worked in the past. But when Jeong-min changes the door entry code and announces that he’s keeping the cat, Ha-neul begins to realise that he might finally have found his partner’s limit. It’s hard not to hope so as he is plainly exploiting Jeong-min, who pays for everything and whose only consistent failing seems to be difficulty expressing his feelings, but Hong-nae’s performance makes us care about Ha-neul all the same. He clearly doesn’t really understand the damage he does. He has a lot of growing up to do, but in the course of the film will be confronted by a crisis which forces him to reassess his priorities and start taking some responsibility.

Bong-sik, likewise, is stumbling through life creating chaos for other people, struggling in ways that are mostly a consequence of his fear of growing up. He’s attracted the attention of local badminton player Min-ho (Kwak Min-gyu), who is older and not terribly exciting but whom he nevertheless feels an attraction to, but he keeps sabotaging this potential relationship, apparently out of a dislike of commitment. Easch of the two friends can see what the other is doing wrong but struggles to apply any such analysis to himself. They are at their most pleasant when alone together, the only time they let their defences down and really let their likeable inner selves get room to breathe.

Set in Itaewon, one of the most gay-friendly districts in Seoul, Made On The Rooftop - part of the 2021 London Korean Film Festival line-up - is perhaps South Korea’s most positive gay-themed film to date, depicting a generation who expect and generally experience the same respect as anyone else. It’s this that gives the film some of its underlying comedic value, as Ha-neul and Bong-sik are still far from relaxed, finding a plethora of other things to be anxious and self-conscious about; but this, in turn, makes them easy for viewers to identify with regardless of sexuality. Director Kim-Jho Gwang-soo has set out to normalise gay life in a country where there is still a lot of prejudice, but he’s smart enough not to do so by presenting us with saints.

Although the main focus of the young men’s conversations is romance and Bong-sik’s ambitions, Kim-Jho finds room for social observations, looking, for instance, at the impact on lifestyle choices made by an economy in which young people feel (not unreasonably) that they’ll never be able to afford to buy their own homes. There are also reflections on dating culture, though the protagonists mostly go to bars to drink and dance, and on the persistence of culinary traditions which still have the potential to bring people together across generations.

For all their pretensions to a life of carefree glamour, Ha-neul and Bong-sik are both quite traditional in terms of what they really want out of life, and there’s a warmth and sympathy between them that makes the film a delight to watch. Homophobia is not altogether ignored, with Jho-Kim illustrating the way that its shadow continues to distort people’s life choices even when it might not really be there, but this is a forward-looking film which emphasises that there’s more to life. 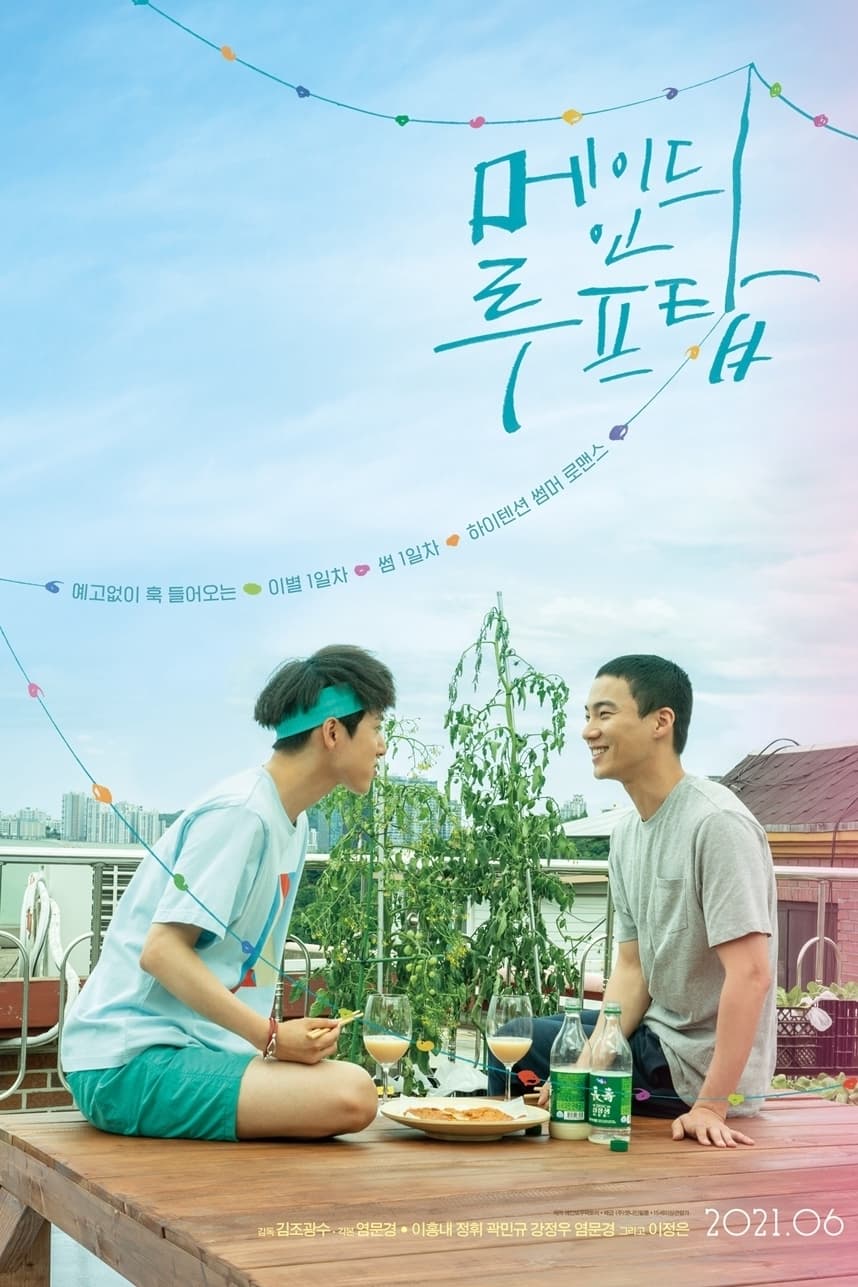 After his boyfriend leaves him, a young man moves in with his best friend and they spend the summer hanging out on the rooftop.