Luc Besson has made a bit of speciality in fielding strong female characters from Nikita onwards. Lucy as played by a feisty Scarlett Johansson, fits the mould perfectly – a woman who becomes the first human to unleash 100 per cent of her brain power.

Although uneven in pitch and pace, the film proves strangely engaging with enough reserves of oomph to carry through some repetitive fisticuffs and chases while the original premise about evolution and the labyrinths of the mind lifts it on to a higher plain.

The narrative switches between the present day and the dawn of man. Johansson’s Lucy is an American blonde, studying in Tapei who becomes embroiled with a Korean crime boss (played by the archly villainous Choi Min-sik).

She is forced to become a drugs mule with a difference: a bag containing a highly potent synthetic substance called CPH4 is sewn, under duress, into her stomach. When it bursts, she begins to experience some unusual side-effects: rather than being restricted to ten per cent of her brain power like most of us she begins to accelerate to 20, 30 and 40 per cent and beyond in rapid succession.

Her condition manifests itself in all kinds of ways, not least in her ability to turn the tables on her captors and to make contact with Morgan Freeman as a professor carrying out research in to the subject of cerebral development who may be able to save her.

Lucy is in a struggle with her body, glimpsed in a particularly graphic moment aboard a plane as the particles tussle to break out of the confines of herself. Besides Freeman, she is aided and abetted by a Parisian policeman (Egyptian actor Amr Waked) who mainly stands well clear to let her get on with the job. Her aim is to use her powers for the good of humanity and to trounce her enemies.

Although unavoidably referencing everything from 2001: A Space Odyssey through The Matrix to The Tree Of Life and Transcendence, Besson proves he can still concoct a roller coaster ride that harnesses special effects to his creativity in a way that proves stimulating, arresting – and great fun. 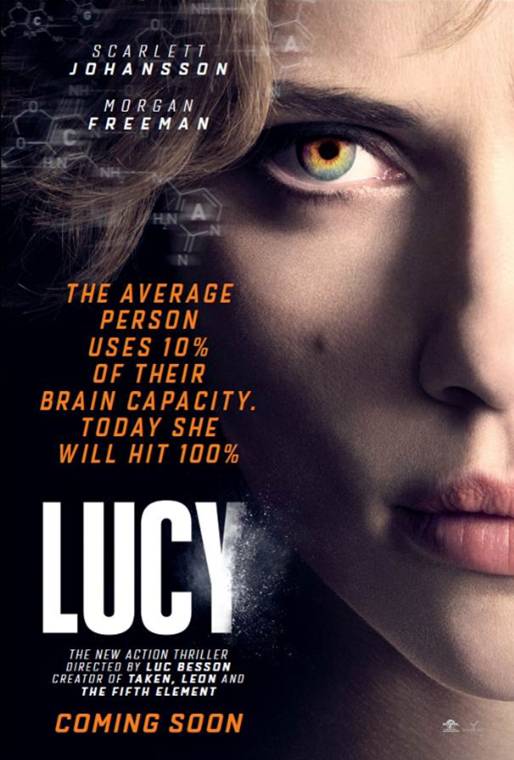 A woman transforms into a super-warrior.

Besson takes a bow in Locarno