As this film opens Paul and Nana are going through a break-up. Each is filmed with their back to the camera. As Nana says she wants to die, it makes me think that, when we turn our backs on the most significant people in our lives, it can be like turning our backs on life itself. Such a big part of our identity is bound up with them that there seems nothing left. It is as if we have failed to heed the advice of Montaigne, quoted at the end of the opening credits: “Lend yourself to others and give yourself to yourself.”

Of course, Godard may not be intending for me to have such thoughts. For much of the film I get the distinct impression that he does not want me to interpret anything as anything, but just to accept it as it is. But the film, within a few minutes, has sparked off some interesting and worthwhile thought in me and I like this. It seems to be what art should do. And that it should do it simply by existing.

For much of the film that follows, part of my mind is taken up with enjoying the crisp black and white photography. The streets of Paris, and other simple but finely observed detail. The lustre of Anna Karina’s hair – she plays Nana – is as enchanting as if I were talking to her. And maybe talking about nothing very much in particular so that my mind could wander to such things. The quality of the print is sufficient to make out individual hairs – or hairline cracks in walls and furniture.

The overall effect – taken with some other devices that I only slowly become aware of – is to give a documentary-like feel to what the camera is seeing. Nana splits from Paul and drifts into prostitution. It happens without any big dramatics. She has been working in a record store, is having trouble paying her back rent, and, after a few other minor incidents, we see her with her first client. The look of repressed emotion on her face is one of the most stark and memorable images in the film. A bit like Edvard Munch’s painting, The Scream. But sublimated into what is portrayed as a very everyday setting.

Later, in a rapid monotone, Nana’s pimp even gives us a run-down of prices, laws, regulations and practices. It is almost the Brechtian splitting of the film into 12 chapters (each with long titles telling us what is about to happen), and Godard’s increasingly frequent experiments that separate the sound from the image, that remind us this is fiction, not docu-drama. For instance, towards the end and when Nana is with a young man she rather likes (and the attraction seems mutual, maybe love), their conversation is not heard by us but only seen on the screen as subtitles. They are communicating soundlessly perhaps, as lovers do.

There is a long scene where Nana discusses the meaning of language with an old man, a philosopher (played by Godard’s former philosophy teacher). Although this is outwardly quite deep, I did not find the arguments nearly as profound or rigorous as in Godard’s later film, 2 Or 3 Things I Know About Her. Prostitution is not used here, as it is in 2 Or 3 Things, as a political metaphor. Susan Sontag, in her aptly titled essays, Against Interpretation, suggests that it is “the most radical metaphor for the separating out of the elements of a life – as a testing ground, a crucible for the study of what is essential and what is superfluous in a life.” She sees Nana as having divested herself of her old identity and taken on her new identity – that of a prostitute.

In the version I watched, quite a few lines were omitted from the English subtitling, so my smattering of French came in useful. But I needed some of the subtler French puns on the ‘life’ and ‘chickens’ pointed out to me.

As the film came to its not untypically Godard-like abrupt ending, I wondered for a minute if it was as great as some people often claim. The celebrated critic Roger Ebert, for instance, singles it out as one of the great movies of all time. My mind wandered to such movies as Last Year In Marienbad, and Jules Et Jim, both made about the same time and both of which have left quite a deep impression on me. But only for a minute.

It's My Life is different, yet again, to any other work by Godard. But it is deceptively unassuming and remarkably solid piece of work for all its sense of transience (Godard compared cinema to a train rather than the station). It can also be seen as a love letter from Godard to his wife, the beautifully photographed Anna Karina. 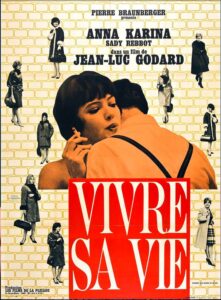 A woman drifts into prostitution after the break-up of her relationship.