In 1980, William Friedkin's crime thriller Cruising shocked many cinemagoers and upset the censors with its portrait of underground gay clubs in New York. A full 40 minutes of footage were excised from it, mostly from one scene shot in a leather bar. In 2013, James Franco and Travis Mathews set out to reconstruct that lost footage. This film consists not only of the reconstruction itself but of interviews with those involved, explicating the reasons for their work and musing on censorship and cultural taboos.

Given how many young filmmakers there are out there trying to shock with sexual themes, how many trying to impress with painfully studied, self-conscious art, it remains surprising that Franco should be one of very few producing genuinely powerful art about sex. He has said in the past that he'd love to be gay, but he never feels like an outsider when dealing with these subjects, even when his different perspective gives him access to a sense of bewilderment not present among those who have never expected their voices to be valued in the mainstream. Clearly aware of his debt to queer cinema, he questions the sensitivity that still remains around depictions of gay sex. Meanwhile, the few straight actors in the film discuss their own hesitations and Val Lauren, who plays "the Pacino character" from Cruising (somebody really needs to punch him in both eyes to get the look right) talks about how others have warned him off participating because "it will just be seen as pornography" and it could damage his career.

Part of what makes Interior. Leather Bar such a fascinating piece of work is its focus on Lauren's journey and the similarities between that and the experiences of Pacino's character. Lauren engages in probing discussions with other actors, trying to understand the new environment in which he has found himself immersed. Though he volubly resists the process, we see his feelings about that environment changing, see him being drawn in. His sexual orientation may remain consistent but his relationship to different forms of sexual expression is indelibly altered. Franco fumbles with Kantian analogies, trying to pin down the difference between the idea of gay sex, which still disgusts many straight people, and the inevitable mundanity of the thing in itself.

From these discussions, a clear difference emerges between homophobia as we normally understand it and disgust at the concept of gay sex, the latter present even in some of those who seem utterly at ease with gay people otherwise. Some of those involved in the project express a sense of shock and wonder at what they are filming that will seem quaint to those already well acquainted with queer cinema; but watching someone else boldly challenge personal boundaries, even if one does not share them, proves strangely compelling. Despite all the hesitation and uncertainty, the footage produced is both realistic (there are some cast members who have personal experience of such environments to draw on) and erotic.

One of Franco's contentions is that the taboos of 30 years ago have shifted now, yet it's still hard to imagine this footage getting past the censor uncut, and ironic that he called Friedkin only after most of it had been shot in order to hear that the older director had always thought of it as pornography. Though Friedkin was not a homophobe himself and shot his original footage in clubs where his friends went cruising, his film was seen by many as homophobic because it confronted mainstream viewers with a depiction of gay people at odds with the "we're just like you" line being pushed hard by many gay rights groups (and, of course, quite true of many gay people). The question now is how Interior. Leather Bar will be received in relation to this, though it hardly seems likely to attract a mainstream crowd, art film also being confined to a niche and disdained by many.

Some critics say they find this boring. It isn't meant to be a thriller. Therein lies the difference between getting excited over the idea and coming face to face with the reality. This is a curious film, an important film and, in its oblique way, a very funny film. It doesn't need the pornography of gunfights and serial killers. 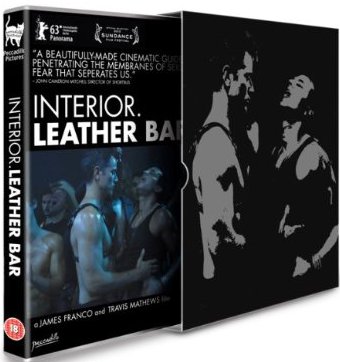