14 years after the first Incredibles film, the Parr family are back, and goodness is it great to see them. Though one could take issues with yet another Disney superhero sequel, the gap between the films has not been wasted - advances in animation technologies means that the Incredibles all look even better than before, but it also feels like the wait has been for a story that feels right.

It's not quite a general rule for Pixar sequels that they cleave closer to spy movies, but they're certainly a touchstone, from hints John Barry's bond scores, of jazzy Lalo Schifrin, Michael Giacchino reprising with fanfare - there might even have been echoes of the Avengers theme, all brass and bombast here. It's a sort of super-spy Sixties though, visible in the buildings, the costumes, the cars too, from fins and aerodynamic finials, space-age sweeps and Mercurial glints and pointing, pastel motels and hillside villas all Tony Stark and Philip Starck. Any film that's got a maglev and a monorail is on the right track in my book. That monorail appears to be the one from Disneyworld, the rounded sweep and bubble of the jet age, that chromed futurity before the high-bypass turbofan. It's gorgeous.

There are new heroes, a new villain, new powers, bold and amusing uses of them - though if you're a gamer you'll have a portal of insight into some of the tricks on display. When the Parrs are swinging together it really hits the spot. It's not quite the entire cast of The Incredibles that return - Syndrome is otherwise engaged - but Brad Bird's brought back everyone for a new adventure. Samuel L Jackson reprises his role as Fro-Zone, and if he wasn't already the coolest man in superhero movies his theme tune will keep you going until Marvel Girl lands. After a technical defeat of John Ratzenberger's Underminer, albeit in a way that renders the computer game Rise of the Under-Miner non-canon, the Parrs are forced once more to relocate - the new challenge though falls to Elastigirl, Holly Hunter excellent as ever, given the opportunity to fight crime, and for the relegalisation of super powered vigilantism.

She does so at the behest of the Deavour siblings, Evelyn (Catherine Keener) and Winston (Bob Odenkirk), moving on from Municberg and bringing justice to the streets of New Urbem - a mega-city, one whose geography reflects various Metropolises, Lang streets, offices full of Clarks, rivers and bridges like the Chicago of Jupiter Ascending, alleyways waiting for Bat- or Spider- or Watch- men. It's no stretch to say that Elastigirl commands them, bends that credible geography to her will to help her save the day. It's Bob "Mr Incredible" Parr (Craig T Nelson) who's minding the home front, and while there's plenty of opportunity for comedy stereotypes they're engaged with and used in ways that feel far more affirming than anything else.

If it weren't for all the other bits of superpowered mayhem in The Incredibles, a chase through the streets of Municiberg would be a gold-standard highlight of how to create and pace a metahuman melee, one that leverages what we know of how Elastigirl's powers work to slingshot and springboard to new heights, the headlong rush beneath an elevated railway with intermittent shades of The French Connection part of a tone that verges on gritty but never feels coarse, family entertainment with just enough dark to make the brights brighter.

There are, perhaps, a couple of oddities - there's a deeper point about the role of superheroes and an ironic one about the consumption of media in there as well, and I don't think it being a children's movie protects it from concerns about heteronormativity and gendered expectations - but I went into The Incredibles 2 with high hopes and it soared to meet them - my concerns leapt with a single bound. There are so many bits I want to talk about, but one of the real delights of this sequel is how many places it feels like it has achieved novelty, surprise, in so many cases brought about by a solidity of intent and a crispness of execution. Time after time it manages a twist, a delightful extra turn, and then sticks the landing - not that three-limbed one either. This is playing with convention(s) with gleeful abandon.

It's screening with the short Bao. I'll warn you now that if you go into the film hungry you'll come out craving Chinese takeout, and if you didn't already distrust raccoons you'll be looking at them in new lights. Ralph Eggleston's credited as Production Designer but I'm already looking forward to an Art Of Incredibles 2 book because I want to see the concepts, shades of Syd Mead's day-time California layered on top of those concrete and steel canyons. I'm already looking forward to seeing it again, to look for the Pixar staples I didn't catch the first time round - I'm sure the Pizza Planet truck's in there somewhere, but I didn't have time to see it for all the other detail to drink in. When Pixar are good, they are very very good, and this is - I hope it comes as some reassurance to parents that this is a film that I'm happy to see again, and to weans as well that despite its pro-vegetable message it's got some good lessons about responsibility and also a poo joke. With multiple identities, and potentially competing goals, Incredibles 2 made me laugh out loud, lean forward in wonder, and made a couple of hours fly by. 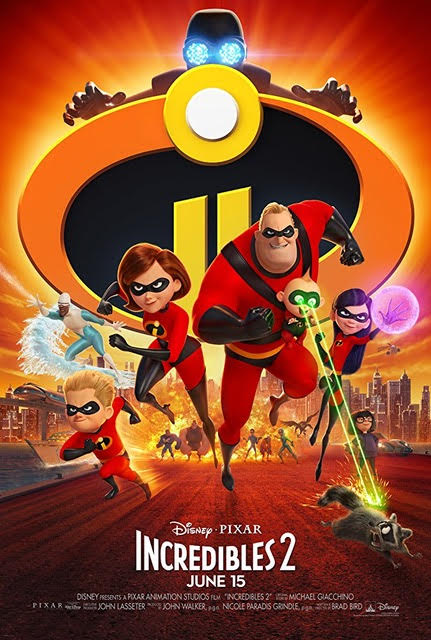 The animated super family take on a new villain - The Screenslaver.