In Search Of Blind Joe Death: The Saga Of John Fahey

Self-taught musical genius, risky living, poor money management, challenging artistic vision, eccentricity and sleeping pills - these things often go together, and they're the ingredients of a classic American story. John Fahey, considered by many to have been the greatest ever American guitarist, lived such a story. Born in suburban Maryland in 1939, he developed a passion for old records that would lead him into the haphazard life of an entertainer. He may have lacked the temperament necessary to achieve real stardom, but his influence has been extraordinary.

This documentary - named for a fictional, symbolic blues musician credited with one of Fahey's B-sides - tries to get at the man behind the myth. It does nothing extraordinary and contains a fair degree of waffle, but it serves as an effective showcase for some powerful music. In between the half-witted verbiage of chat show hosts and confounded music journalists are little gems of interviews with Fahey's friends and fellow musicians. They are perhaps scarce because he cut himself off from so many people over the course of his life, but these stories informed by lasting affection, not mere admiration, provide more insight into both the man and his methods. It's interesting to note, in contrast to the wayward patterns of his life, the precision and forethought with which Fahey approached his work. Though archive material sees him acknowledge a tendency to improvise even in his school days, it's clear that there was never anything careless about his powerful music.

Very much interested in art for art's sake, Fahey disappointed many fans in his later life by pursuing new directions, moving away from work inspired by the Mississippi blues into what he described as an industrial gothic ambient phase. This is where the film becomes most interesting, itself breaking with its comfortable narrative to show the conflict between what is most celebrated about Fahey and what was important to the man himself. It's complemented by his friends' challenges to the usual assumptions about drink and drugs. They highlight a different set of problems caused by the stresses of living as he did, and by a medical system ill-equipped to cope with an itinerant patient who often ended up with more medication than he should have had. This is not the conventional rock and roll lament but a more personal tale with more to say about how its subject's creative approach contributed to his self-neglect and subsequent decline.

Fahey himself comes across as slightly distant, sardonic, but joyful when playing his guitar. The music itself is rapturous and well captured here, with a nice touch in the end credits to contextualise it. Though the film feels padded and some sections of it really don't work, it shows a genuine love for its subject and has plenty to delight fans. Fahey's playing is itself enough to draw in newcomers. 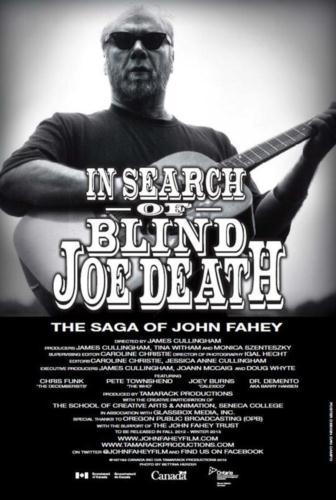 A documentary about the iconic and hugely influential guitarist.