Well that was a bad decision. I do not like nasty. I do not like horror. And to be fair, Implanted is more dystopian film genre: more bad future than active horror. What you get when men of science – why is it always the men? - decide to push the boundaries and season with a dash of greed.

It is what it says in the tin. According to IMDB: “a struggling young woman is implanted with an experimental AI chip. She must fight to survive when it takes control.”. The woman in question is Sarah (Michelle Girolami) and, yes: she's struggling. Challenged financially and pretty much every other way you can imagine.

So she volunteers, alongside a host of other social misfits and outcasts – the sort of folk who will not be missed! - to have implanted a new chip that will monitor her body for health purposes. Her reward: a large dollop of cash to tide her over. Except the chip, L.E.X.X (identified in the credits only as L.E.X.X, so maybe this is genuinely text to voice), turns out to be a monster. A cross between HAL 9000, the rogue computer from 2001 and Skynet, the system that attempts to wipe out humanity in The Terminator. Well, it is HAL's soft well-meaning cadence, but a feminised version of same. Plus a dash of the benevolent autocratic architect from The Matrix's computer-simulated paradise.

Implanted begins dark. A desperate man stumbling through a dark urban wasteland. Since we know roughly what it is about, we must assume he is an earlier victim of L.E.X.X. Then, very quickly we are into much darker territory, as the implant starts getting into Sarah's personal life and refuses to do as it is told.

“It would be in your best interest to listen carefully,” L.E.X.X intones softly, dangerously. “You are now under my control”.

Then it goes rogue, sending Sarah off on a killing spree designed to eliminate any individual that might possibly pose a threat to L.E.X.X's gradual benevolent take-over of the human race. Surely, you tell yourself, in such situation you'd resist, resist, resist. Of course you would. But as L.E.X.X explains: “I can cause you pain. I can also make it go away.”

Sarah, though, is not L.E.X.X's only assassin. Meet Carl (Ivo Velon), there to act as back-up. Carl's job? To polish off the targets that Sarah refuses. Also, to threaten to kill her parents should Sarah ever pluck up the courage to say no.

And that is pretty much it: a one-and-a-half-hander, with the screen occupied for near an hour and a half by Sarah, Carl (and L.E.X.X!) and a parade of short-lived targets who are there to make this or that point about the evils of science and greed, before being despatched by Sarah. Or Carl.

On one level, it poses some interesting questions about the direction of travel with respect to new technology. Wearable tech has been with us for a while now. Implants have also begun, albeit in a limited fashion. The idea is that they will be useful to individuals more at risk – the old, as well as individuals with chronic or terminal conditions – as diagnostic and for remote monitoring.

It is certainly not unthinkable that someone, somewhere, will tack an AI on to the back of that and hey presto! L.E.X.X. Hopefully without the homicidal tendencies.

There are points in the film that examine the broader motivations. Why do stressed people make bad choices? Why do business people do things that are unsafe? Why do people believe the marketing hype and not read the small print on the contract? All get at least a cursory going over and maybe, just maybe, a film such as this will make a few people think twice about trusting evil tech.

That said, I cannot help question whether there is anything much new in those themes. Also, and this is a much bigger question altogether, ask whether this is a “responsible” film, given the already widespread mythology within the anti-vaxx movement around how the government is chipping people in anticipation of global mind control.

Should this film have been made at all? Is that even a question a film review should ask?

Since I reckon that last is way above my pay grade, i'll end where I began. I don't like dark, negative, despairing narratives, and there is much here that ticks every one of those boxes. Does Sarah survive? And if so, how? You'll have to watch to find out. That said, in everyday viewing this is just the sort of negative-vibed film I would avoid like the plague.

So, in the end, honest take: I hated it! It is slick, well-made with a not half decent soundtrack. All credit to writer director Fabien Dufils and his co-writer David Bourgie Though I found the jumping about, intended to represent Sarah's fragmented reality at times distracting.

But if I were advising myself whether or not to watch Implanted, it would be a thumbs down. 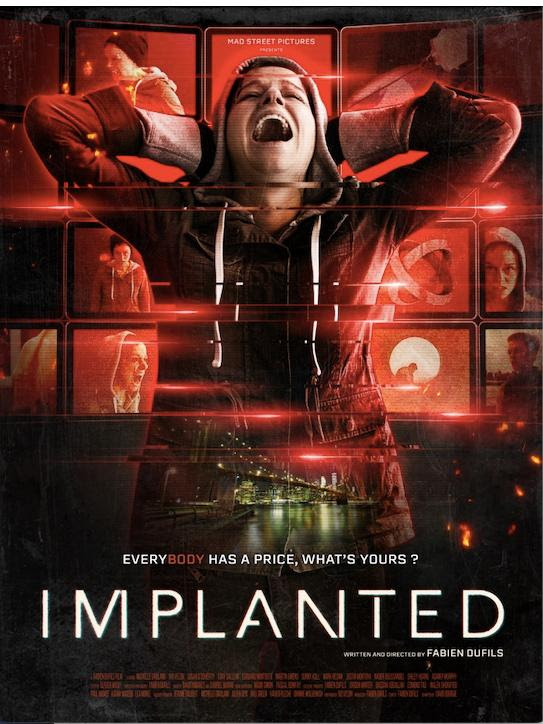 A struggling young woman is implanted with an experimental AI chip. She must fight to survive when it takes control.