Gucci, allegedly, is synonymous with 'worth'. Craftsmanship, from hillside to heel, gold leaf in the sole, a coldness in the soul. We don't start with Gucci though, nor end there. We are not staying, not even window shopping. Everything has its price. Even valuations.

'Inspired By The True Story', it says, in much the same way that The Last Duel was "based on true events". A few things in common beyond that, Ridley Scott directs, Adam Driver looms, Dariusz Wolski's colours are frequently muted to pastels and browns. Based on books, historical European settings, casts of famous faces dripping with award-winners, and too long.

The Last Duel told one story three times and took 152 minutes to do it. House Of Gucci tells one story once and takes an extra five. I could say that neither needs it with some confidence, but in a position of contrariness I will suggest that this sprawling is itself meant to convey a kind of theatricality, a weight, a heft.

Those things in common, the loose connections to history, the based on other works, the famous faces, the dramaturgical conflated with the liturgical, give Scott something in common with another English wright, yer man William Shakespeare. Call this one the Bard of Alien, he has had his history plays, his tragicomedies, his grand guignols. Baldwin IV, The Fall Of The Black Hawk, The Two Gentlewomen Of Arkansas, The Merchant of Vietnam, Titus Xenomorphnicus, All's Tyrell That Ends Well.

I make this reach to make a dispute over ownership of a luxury leather goods manufacturer into an entertainment of moral and leadership lessons. To add to Lear a jet, though in and among its machinery and anachronisms that one doesn't feature.

I do this to lend stature to the tragedy of Maurizio Gucci (Adam Driver), who could inherit but does not want to. I do this to lend gravitas to the faded movie star Rodolfo Gucci (Jeremy Irons) who wants at once to give away the firm but not have it taken. I do this to lend fire to Aldo Gucci (Al Pacino) who wants to make fine goods and good money and not necessarily in that order. I do this to put a dagger (for the footnote nee' Reggiani) before Patrizia Gucci (Lady Gaga) as she seeks to be the power behind this thane of Tuscany. I do this to lend actual weight to the prosthetics that make Paulo [ibid] out of Jared Leto, a figure that fumbling, flailing, foam-applique fat is charitably Falstaffian.

Not just because of a moment diegetically operatic, the bumbling Paolo out upon a catwalk like some recursive Proscenium. Not for the corduroy safari suit that beclowns as easily as yellow stockings and crossed garters. Not a plastic cup and straw that would as easily be a bladder on a stick, a pissing on a scarf, a reference to "dropping the soap". The outright comic relief, when a reference to sacred cows would have even a groundling grinning, levity even in the accent of his wife. All this, from kindness, from the Porsche 944 that is almost objectively the least cool vehicle in the film, from the sketches whose competence belies their misplaced confidence, in service of a Shakespearean mode.

So from that too a conflation of history into a sort of morass of "eightiesness", a reference to a flight on Concorde but no mention of the requirement to connect from Italy to either CDG or LHR. An ostentatious silver Lamborghini, either an early model or the rarer later one without the rear wing, worth an extra ten miles per hour on the straight at the expense of downforce. Downforce and several lira. Lira too, all this pre-Euro, amounts rarely in dollars so billions can be thrown around. An espresso in 1990 cost a thousand of them, but how much was paid for a prominent (vintage) can of Pepsi I know not.

I did go digging but I can't be certain which international drinks conglomerates own what was on screen. I suspect though that the presence of Diageo was accidental as their part ownership of LVMH (the last two are Moet Hennessy) would make this brand cannibalism. The cigarettes are frequently lit, the most legible ones are Warton. Not a real outfit, and a purely typographic logo, and disappointingly close to Wharton-Tigar whose career included time smuggling for SOE and amassing a record-breaking collection of cigarette cards that's now with the British Museum.

Symbols are important. There's someone playing Anna Wintour, though she's not named until the credits. There's a Bloomingdale's Gift Card that even Goneril and Regan would spurn. There's class war aplenty, in a "story full of unnecessary details", and all of it, all of it, branded.

The Chrysler Building might be castored to pop up in the background of shots to make it clear we're in New York. I suspect that there is intent in pretty fierce colour grading to code the locations, it might be grey for the city that never sleeps but that could be the gathering clouds of pathetic fallacy. Rome might be lighter, Milan yellowed, the lakes a certain blue. It might be mood, and not mapping. Whatever the schema it felt like irritation of the sclera. Even Dune didn't always shoot without the whites of the eyes.

The soundtrack is diverse, though it moves back and forth a bit more freely than the film. There's Blue Monday from 1983 in 1983 but older songs come later. There's some attempt to give us places, less focus on times. One, very specifically, but that's for dramatic effect. An inconstancy of detail might be forgivable if it were not matched by inconstancy elsewhere.

Everyone is attempting something like an accent, with about as much accuracy and variation as the synthesis of iambic pentameter and meat thermometer. Driver has form as bad husbands, though here the sex scenes are less touching than those in Annette. Gaga is a powerhouse. Her Patrizia will stand on anyone to get what she wants and any out of shot box to not be dwarfed by Driver. Kyle Buchanan at The New York Times compared her to Joan Cusack in Addams Family Values and meant it as a compliment, and I'll agree with both. It's an intensity, a sense of unhinged propriety, what class war when there's only surface looks like. There are shades of Patricia Highsmith's Ripley, believe it or not. Her quality, though, does not make up for the fact that this is too much a film for any one person to carry.

Not for the first time I find a part of my psyche that should get out more and yet stay locked away agitating for a 'without Jared Leto' cut. Another of those was after Scott's own work, Bladerunner 2049 would have gained thematic weight for evil done in the name of another absent white man. In different makeup so too Suicide Squad, and so on. The choice to make Paolo a buffoon was not I think made lightly, as said, it is from generosity of spirit that I would class it as in the mode of the Tempest-poet, old upstart crow hisself. Recasting this real drama to some simulacrum of the past, filling it with desaturated scenery for desaturated chewing, it could do with an intermission if only to get one of the many featured drinks.

There's a point where you'll know something isn't a Picasso, but you'll recognise it because it had a film made about it which pretty conclusively suggests it would be hanging somewhere else. Someone makes a reference to not having "basic cable" and if, like me, you've got a pretty solid understanding of Italy's politicised television market you'll know that it never got a foothold there, for reasons including issues with the industry'debt-forward finance model, geographic complexities from the national mixture of history and density, but also that there were so many terrestrial channels. I'll grant you that it's vanishingly unlikely that anyone not us would know that, but welcome to the club. The presence of Salma Hayek as 'Pina' Auriemma as a television psychic is (super)modelled from truth, but it's a further act of obfuscation through ostensible translation. If nothing else the sorcerous presence serves to further indict Patrizia, she even causes three to meet again.

Other details feel off in differently accessible ways. Paolo's portrayal, for a start, but there's a nickname given to Tom Ford, one of Gucci's many saviours, that seems more clumsy and more gentle than one might expect. I don't know if that's professional courtesy to someone who has also adapted books for the screen, but every appearance of a real person is a reminder that this is intersectional with the truth.

It's also intermittently parallel with quality. Given how important to the film are fakery, forgery, labels, loyalty, its own inconsistencies work against it. There's craft to it, clearly, even value in its ingredients, but as with many counterfeits it is the fit and finish that fail it.

If House Of Gucci is successful then fair enough, not all cloth is cut for every customer. I suspect though that it won't be, not least because it needs trimming. One can say of its nearly three hours that it's ready to wear, and wear it does. If you want to see its stars, you've other options, if it's a tale or fable you want told, the same is true. There's always a temptation with Scott's work, in particular the frequent revisitation, to read films as stand-ins for his own career. I'm not sure if that works here, in a story that's initially enjoyable but goes on too long. 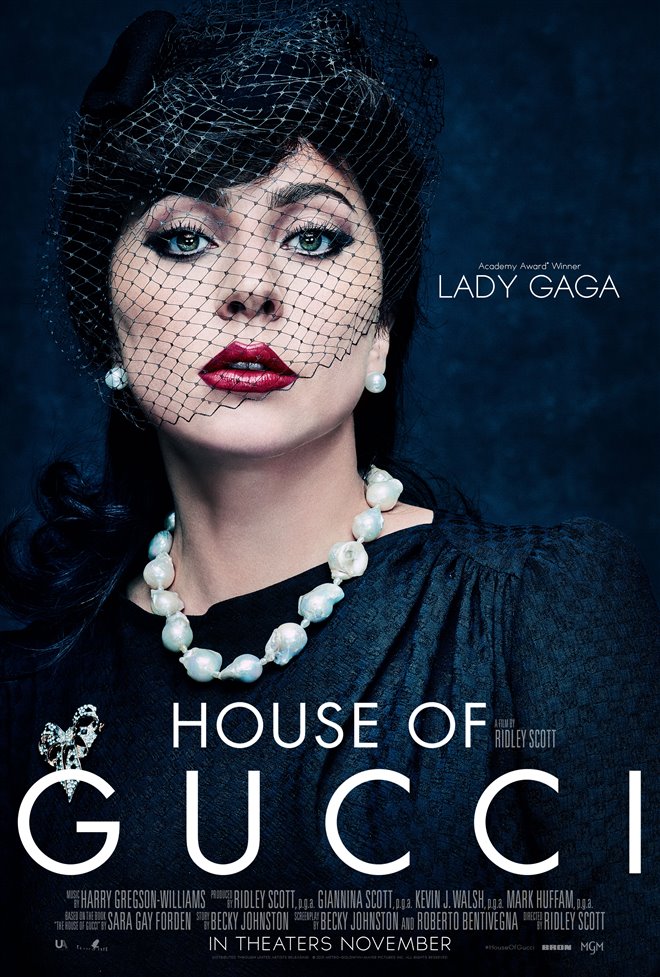 When an outsider from humble beginnings marries into the Gucci family, her unbridled ambition begins to unravel their legacy, leading to a spiral of betrayal and violence.

Writer: Becky Johnston and Roberto Bentivegna, based on the book by Sara Gay Forden