Some film taglines are asking for it. Highlander's, famously, was "There can be only one." It continued to be used for this and two further sequels. Somebody should have paid it heed.

Generally speaking, when a film makes the impact that Highlander did, it's extremely unlikely that it will be the only one. Although that original enjoyed only limited success its reputation, five years on, was considerable. Legions of fans waited eagerly to see what the sequel would bring. But some films are naturally self-contained and finding a way to move on from this story was difficult. One solution might have been to explore a story from its hero's past. Instead, writer Brian Clemens chose to set it in the future, transporting the fantasy swordfighting action into one of the most cliched science fiction scenarios available. Cue disappointment on a Phantom Menace scale.

To be fair, if one approaches the film now, without that weight of expectation, it is almost redeemed by its silliness. Immortal warriors are one thing - we've shared stories of them for centuries, and disbelief can duly be suspended. Immortal warriors who turn out to come from an alien planet but still happen to be called Connor MacLeod ("of the clan MacLeod") and Ramirez, at least one of whom has completely forgotten about this for several centuries, is stretching it a bit. And yes, Ramirez was killed in the last film, but that doesn't stop Clemens resurrecting him here - after all, Sean Connery is an important contributor to the film's bankability (Clancy Brown, to his credit, refused to be involved). Connery has been in plenty of bad science fiction in his time but here he's really slumming it, even if he does get to spend a scene reciting Shakespeare in one of the film's several desperate references to the high art whose boots it can only dream of licking.

Christopher Lambert is back as MacLeod - without him there would be no film - though it's said that he walked out in disgust after viewing the first 15 minutes of the final cut. He shows admirable dedication throughout, giving it his all in even the flimsiest of scenes, but this only serves to make the shoddy quality of the script more apparent. Of course, his girlfriend from the first film conveniently dies, as women in such roles are wont to do, so he gets a new love interest in the form of Virginia Madsen's anti-corporate rebel. Madsen, a veteran of some of the genre's worst excesses, seems more comfortable than her fellow cast members, happy enought to shout and run around and pretend something significant is happening.

Then there's Michael Ironside. Many of his sneering villains are worth a star in themselves, but here it's not him who wins the film its unlikely one star rating - that's simply a product of a system that won't allow us to go any lower. When Ironside looks bored, you know your film is in trouble. The actor complained that a realistic (read: cheap) approach to stunt work meant things didn't work properly and he could never get into his stride. This is a dial-in performance distinctly low on menace and even the fight scenes fail to come to life.

There are plenty of low budget science fiction films with weak acting, bad scripts and tacky plots that remain great fun to watch. This isn't one of them. Its desperation is apparent in a scene where a jarred jukebox suddenly blasts out Queen. If this is a kind of magic, it's Paul Daniels after several sherries too many. 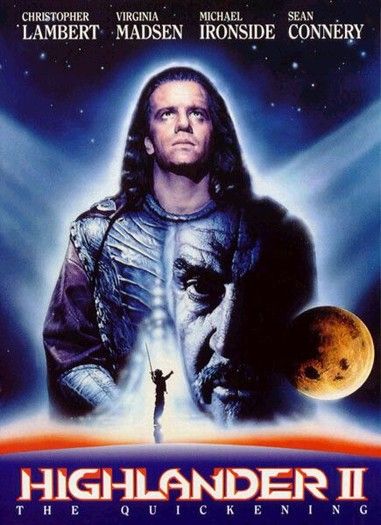 A sequel which reveals the extraterrestrial origins of the combatants from Highlander.