A film about domestic violence, eh? Fun family viewing for the weekend? No. I'm absolutely not dissing either the film or the theme. Just that I am a reluctant reviewer at the best of times. I don't deal well with down or depressing plotlines.

So when I was asked to review Herself, which is all about the consequences of domestic violence and the efforts of abused wife and mother Sandra (played by Clare Dunne, who also wrote the story) to carve out a new life for herself and her two young children (Molly McCann and Ruby Rose O'Hara), I was sceptical. OK, Jane, it will make you cry, but it's also heart-warming. Positive, even if the protagonist does hit some pretty major bumps along the way.

Yeah, yeah. I've heard that before. But they were right.

That's not to say it does not kick off – literally – with a graphic and realistic depiction of a woman on the receiving end. Sandra is subject to a brutal beating from husband, Gary (Ian Lloyd Anderson). Trigger warnings can be overdone. In the case of this film, I would seriously recommend that anyone who has been a victim of such violence to think carefully about how, or even whether, they watch Herself.

I found it hard to watch, and I have never endured such abuse. How this would play for someone who has, I cannot know. Just...tread carefully.

For while the violence is not repeated, it returns, in flashbacks, triggered by Sandra's necessary encounters with Gary – weekly, as she hands the girls over for court-ordered access. Or by simple everyday events, for instance, changing the bandage on her damaged arm. Then there's the more subtle undermining of Sandra that takes place at these flash points. “I'm getting counselling,” Gary proclaims at one of these occasional encounters, before laying on the subtle – and not so subtle – pressure for her to return.

Like, sure (reviewer's comment here): if you weren't such a controlling and manipulative a'hole, you'd know that your behaviour was just a continuation of abuse by other means. It's “both-sidesing” a situation in which he is perpetrator, Sandra victim into one where they are jointly responsible for...her being beaten up? It's undermining, by being filtered through “concern” for the children.

So far so realistic. This is shored up by some fairly depressing encounters between Sandra and a system, which seems keener to police her behaviour, in case she is getting something from it she isn't than to, y'know, actually do something constructive to help. Too, we see Sandra working every hour she can to make a life for her family. Serving in a pub. Cleaning floors. Cleaning – and caring – for cantankerous former GP, Peggy (Harriet Walter). The latter has been laid low at least by a broken hip, but maybe other unspecified conditions as well.

It is at this point that the film shifts from realism to something a little more fantastical. For, not only does Sandra decide that the way out of her predicament is to build a house for herself; but also, by an unexpected twist of fate, it looks like that might just happen. Fantasy? Well, this is Ireland where, it appears, self-build is not just upper middle class pipe dream, but a thing achievable by folks able to raise a paltry £35k. After an unpromising encounter with builder Aido (Conleth Hill), Sandra puts together a mixed crew of mates and out of work construction workers who are more than keen to help her.

But, you know – you just know! – something is going to happen to upset the apple cart. Either officialdom, which is happy to pay out hundreds of thousands of pounds to keep Sandra in temporary accommodation rather than come up with the relatively paltry sum needed to self-build. Or planning regs. Or Gary. Or Peggy is going to get ill and her sister is going to call a halt to the project. Or, look: you know it isn't going to go smoothly, and the happy middle is prelude to tears and, maybe, tragedy at the end. No spoilers, though! Except to say I loved where it went.

Clearly, this is a film about abuse and its consequences. Central is Sandra's response, when challenged by the authorities: “You ask me questions like 'why didn't you leave him, but you never ask him 'why didn't he stop?'”!

There is also an important sub-theme, referenced within Herself by Aido, once he gets going on the project. This is the concept of Meitheal, a word I'd never heard before, but which, I discover, is an Irish expression of “the ancient and universal appliance of cooperation to social need”. Another heart-warming tweak, since it is Aido whose initial response, when Sandra asks for help, that “no one does anything for nothing”.

Yes, Herself is first and foremost a film about a woman's journey. It is also, in a smaller way, about another journey, from selfishness to community spirit.

Loved it...and the fact that it has already won a crop of awards, including the Human Rights Film Award at the Dublin International Film Festival in 2020 for director Phyllida Lloyd is rightly deserved. 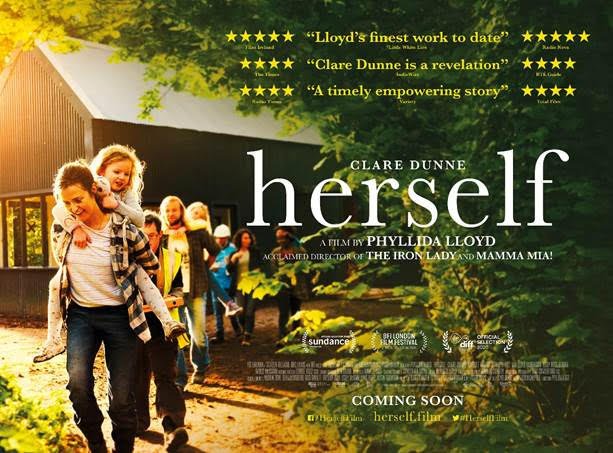 A domestic abuse survivor tries to build a new life - and home - for her kids.