Between 1959 and 2011 it was illegal to buy a new car in Cuba. The result was an island whose automotive traditions were frozen in time, and as it became easier for foreigners to visit, the chance to see vintage vehicles cruising the streets of Havana became a tourist magnet. These are cars designed in an era where little thought was given to safety and none at all to reducing pollution. Only two things mattered: style and speed. In terms of aesthetics, it's Cuba that achieved the American dream.

As well as forbidding the purchase of new cars, the Cuban authorities took a tough line on motor racing. Just before the revolution, a tragic crash killed ten people and left the nation reeling, so it was perhaps understandable that, seeing it as a sport practised only by the rich, they decided it was too dangerous to be worthwhile and banned it. As usual when governments ban things, however, it just went underground. Races took place out on lonely roads in the dead of night. Enthusiasts reclaimed and repurposed parts wherever they could, constantly adjusting and souping up their machines. The result was something far more dangerous than the sport that continued to evolve in official venues around the world - and far more exciting.

Havana Motor Club was filmed in the aftermath of this era, when modern cars were starting to become available but cost over two hundred times the average islander's annual income. The government was thinking about licensing official races, but would they actually happen? Could the sport be reinvented in a way that made it fit the Cuban social ethos, benefiting everyone? And could the carefree spirit of drivers and fans be tamed sufficiently to meet basic standards of health and safety?

The latter is a concern that many people find boring and frustrating, but when you watch crowds try to get close to the action by running onto the track in front of the cars, you'll be reminded why it matters. These are people who are not even used to dealing with dense urban traffic. Their inexperience, however, makes the concept of racing cars all the more exciting, and there's a level of passion here long since faded from the likes of Formula One. That's reflected in Bent-Jorgen Perlmutt's direction, whether we're hurtling through the city streets or accelerating along an open an open road toward a low horizon, Vanishing Point style. Perlmutt really knows his stuff and effortlessly evokes the iconic movie imagery that evolved to show these automobiles at their best. This gives the film a romantic character that goes deeper than the enthusiasm of its subjects or the strange history of the island itself.

That history is tangible within the unfolding narrative, but this is neither a revisionist apology for Castro's failings nor a triumphalist outsider's view. The Cubans we hear from are proud of their culture, of their socialist society, and determined to take the best of what the wider world has to offer without compromising those values. They also have plenty to complain about - like people elsewhere - when their desire for personal freedom is frustrated. Sometimes that means impatience with notion of wearing a seatbelt or sticking to a lane. Sometimes it has meant risking their lives in tiny boats, attempting to reach the US. Ingenuity triumphs, however. Sunken boats are raided for their engines. Ultimately, they know that life in the Free World may not be all it's cracked up to be. It is better, they say, to drive fast cars. 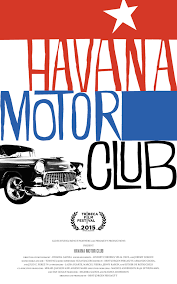 A documentary about motor racing culture on an island where it has been outlawed for decades.