Michael Myers killed his sister when he was 6. He came back and killed some more at 21. That was 1978. It's been a while, but he's come back again. Again.

Over all the genre additions to the slasher pantheon are numerous but continuities retroactive and otherwise make the mythology of Myers mysterious. If I have it right and have identified the dead-ends and false-starts I think it works out like this.

There's Halloween (1978) and Halloween (2018) and this. Kills follows directly from 2018, its last scene(s) are our first. The flame is passed like chain smoking, and is similarly healthy.

Ground out by this are II (1981), 4: Return Of... (1988), 5: Revenge of... (1989) and the unnumbered Curse of... (1995) and know that with the same inevitability of much of this film that those ellipses are followed by Michael Myers. Also extinguished in this retelling are the remake Halloween (2007) and its sequel II (2009). Further left in ruin are H20: 20 Years Later (1998, arithmetic fans) and Resurrection (2002) which by this point starts to seem if not ironic then inevitable. We will not speak of III (1982) Season Of The Witch. There's not an indication from this film itself that we can expect Halloween Ends next year, but given all of the above I'm not sure I would or do believe it.

Do you care? I ask genuinely because I realised that I didn't. The novelty of a franchise that's got three different films with the same name and two more with similar titular doppelgangers is limited. I would go further than that to say that if you're not already a fan not just of genre but series there is little for you here.

There is an exercise in nostalgia from the fonts in the credits that seem serif-perfect to the liberal reapplication of Carpenter's original score. Characters return, cast too. Jamie Lee Curtis as Laurie Strode hasn't much to do, spending much of the film recovering from not dying in the last one. She's time to fail to stop what amounts to a lynching and solemnly intone regret about things done and not done in films canon and possibly not and roads not taken in crossroads past.

That lynching is built around another failure of the authorities, and Warren County's sheriff's department seem better at cover-ups than contingency planning. They've clearly not got procedures for dealing with vigilante action, and though they have apparently called for aid there's no answer.

There's perhaps some invention here, but not much of it is in pacing or performance or paraphernalia. "Spray and pray" rarely works for firearms but it would seem to do less well for firehoses. The paper/rock/scissors ledger that includes "knife to a gunfight" must now be updated to include Halligan bars and fire-rescue saws. I think they've composited some of this cast into and among some of those from 1978 or the reverse. With the grit and grain of nostalgia I could not tell what was 43 years old or newer but the film saw to remind me.

It's 106 minutes long and it lumbers. It's got three generations of the Strode family in peril and still dealing with the legacy of Myers. They are not alone in that, nor in still hysterical reaction to relentless pursuit. Of the blank-faced shape that haunts them, yes, but perhaps profit and maybe, maybe, creativity. I say this as a fan of Star Wars, but that stretch of the late Seventies gave us several films that folk can't stop coming back.

David Gordon Green has a directed a wide range of subjects, not the average Joe, some Stronger than others. There might be undercurrents and Undertow in some of his works but this is much more transparent. He was three when the first film came out and I don't know if it's projection that means there's a young boy bypassed who later wants revenge. He co-writes with Scott Teems and Danny McBride. Teems has directed two features he'd adapted from other works, this might count as more of the same. McBride may be more famous as an actor but he's written for and with Green several times before. He's not onscreen here, if you have seen him in something recently it was probably Alien: Covenant so work elsewhere on Halloween notwithstanding he's used to sequels that make one think less kindly of the original.

Is it representation to have a black couple and a gay couple put in the sights of this replica of a replica of the face of William Shatner? I think this might pass the Bechdel test but near enough the only conversations between female characters are intergenerational and most (if not all) are about killing(s) or being killed. There's some escaped patients from an asylum too, the mob (pitchforks wielded separately) might be the real monster, but if there's anything that absolutely will not stop no matter others' efforts it might be the series.

Linda Hamilton returned triumphantly to a role after decades in the similarly discontinuous Terminator: Dark Fate but Curtis is poorly served by this. Is that a fair comparison? I think so. It isn't about budget. Leading a horse to water might not get it to drink, but it does give it the opportunity for reflection. That there isn't actually a dead one here doesn't mean nothing is being flogged. Save your money, save your time, and save the date for something else. This does not do the trick, even as a treat. 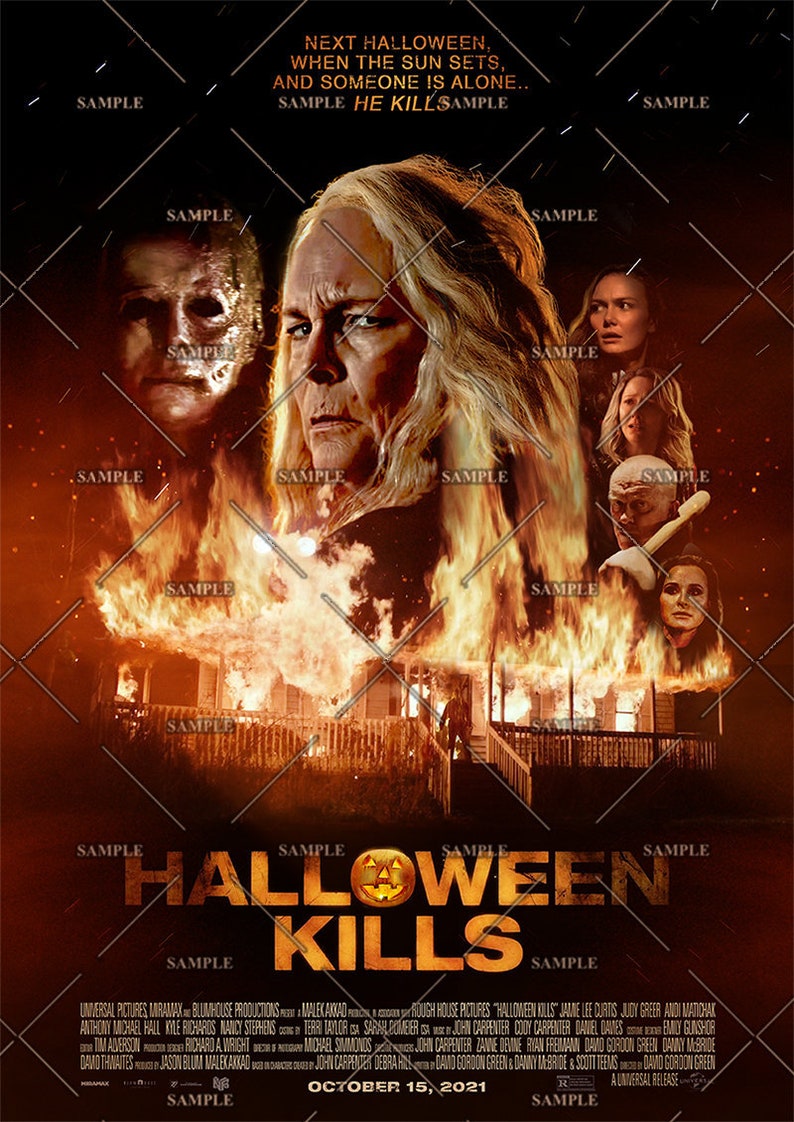 The Halloween night when Michael Myers returned isn’t over yet.