In the 53 years since his pioneering space flight, a great many films have been made about Yuri Gagarin - features, documentaries and shorts, even music videos - all trying to find unique angles on the man behind the legend. This is the first one to use modern special effects in recreating the flight itself. Exactly 148 minutes long - the same length of time as that flight - it also tells the story of the people on the ground who were pivotal in making it all happen.

In characteristic Russian style, this includes Gagarin's family, his peasant parents iconic pastoral figures resembling those depicted in the country's art for centuries; their presence encodes the importance of tradition and of the social effort that led to this point. Military figures are also present, both superiors and colleagues, and there's a strong sense of the familial relationship that developed between some of them, living in such close quarters and facing such great challenges together. Through this, we are able to gain a perspective on the flight that isn't usually considered - the awareness of individuals that they were coming together to place a man not long out of childhood in a position of extreme danger. There's a sense of guilt and awkwardness in some of them, but also a suggestion of awareness that this is about much more than beating the Americans, the line used to inspire the troops - these are people thinking much further ahead.

To provide that broader perspective across time, we see Gagarin in his childhood and youth; gazing at the stars, being swung around in the air, racing along with a wooden plane - each paralleling a step along humanity's journey to this point. It's subtly done, with young actors carrying it well. Balancing this enthusiastic take on progress is Olga Ivanova as Gagarin's wife, aware that it could equally be a headlong descent into madness. Ivanova plays the part quietly, delivering in small touches and glances what the script does not. Meanwhile, offiicers mention in passing the theory that a man travelling beyond Earth's atmosphere may lose his mind as a consequence of cosmic horror. "If it helps, pray," Gagarin suggests to his wife - something many earlier films could not touch on, for political reasons - and we are aware that, for all the fantastic technology on display, this is still a country where religion and superstition hold powerful sway. A tarot reading says that Gagarin will make only one flight. It does not say why.

Most important, of course, is the performance of Yaroslav Zhalnin as the young cosmonaut himself. He conjures up a striking physical resemblance, largely by capturing that famous smile (though, with international cinema sharing certain biases, he's quite a bit taller). Zhalnin also captures that same gentle charisma in scenes of the young pilots together and of Gagarin with his family, but most important is the performance he delivers on his way to, and inside, the capsule. Smothered by a bulky spacesuit, he has only his face, framed within the helmet, to act with, yet manages very effectively to convey the conflict of delight and terror that the situation inspires. It's the only real insight we get into what lies beneath the layers of performance Gagarin delivers to soothe his family and to convince his superiors he's naive enough to do the job.

The early stages of this film rely quite heavily on the audience already having enthusiasm for the story, and may not play as well outside Russia. Later though, the film succeeds in generating tension that will grip even those who already know the end of the story. The claustrophobia of the capsule and Gagarin's restricted movement help to emphasise his vulnerability, whilst those on the ground begin to talk cautiously about something that may have gone wrong. Can they resolve the situation? Should they tell him? Is he capable of handling what must come next/

Suffused with stirring music that may be a little trying for western sensibilities, this is nevertheless a film with some measure of genuine power, and it's an important monument to what was a crucial moment in all our history. 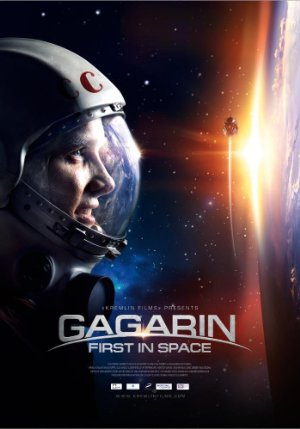 The story of the first man in space.