Freshman Year, or Shithouse, is an ambitious first outing from writer, director and lead male, Cooper Raiff. Not entirely clear, at time of writing which title is operational, since the latter, which feels like a car crash of a title right there is what it says on IMDB. But much of the publicity references Freshmen Year. 2020. Remember that date. Because there is also a Freshman Year 2019 that got roundly spanked by critics.

So, perhaps in an effort to disambiguate the two someone decided Shithouse would work better. I'm not sure i'd have gone with that decision myself. But hey!

Perhaps it was a nod to the hugely popular – and disruptive - Animal House. However, apart from a fair few scatological jokes, ranging from the Shithouse itself, which is the name of a club, various references to the bodily function and the fact that early on, a minor character gets absolutely rat-arsed...and has to be walked over to a shower for hosing down (yes, dear reader: he shat himself! Pride & Prejudice this absolutely is not).

The centre for this movie is the story of how students succeed, or don't succeed, in adapting to college. Also, maybe, how they start a relationship along the way.

Freshman Alex (Cooper Raiff) is not altogether happy with where his life has brought him. Miles from home, a long way from friends and family, he is surrounded by other less than pre-possessing Freshmen for company. Alex spends a large part of his time talking to his stuffed puppy toy. The puppy sort of talks back.

Also, he phones his mother (Amy Landecker), a lot. She, in turn, alternates providing emotional support and making fun of his amatory efforts while drunk. That's drunk mum, not drunk Alex.

Alex then goes to a party at Shithouse where he meets and hooks up with sophomore Maggie (Dylan Gelula).

(It might help, at this junction, for non-US readers, to know that Freshman Year is first year at college, or age 20: and sophomore is the next year, so approx 21.I had to look that up and it helps, a little. The knowing where to locate these two would-be lovers on the circle of life. A single year of age difference. Or 5%.)

As well as being the older woman, Maggie is also aceing her way through College. Not only, but she is the/a resident assistant (RA) on the block where Alex has his room. That, too, I needed to look up, as it felt relevant to the narrative. Perhaps it is. At any rate, an RA is a “trained peer leader who coordinates activities in residence halls in colleges, universities."

So, yeah: Maggie is the older, more sorted woman who, after a tragic death – her turtle Pete has just gone on to meet the Great Turtle in the sky – is ever so slightly off-centre, emotionally.

The two hook up. First at the Shithouse Party, then back at Alex's room. And since Maggie had “buried” Pete in the trash, they retrieve Pete's body and take him off on an expedition in search of a better resting place.

Certainly, the original (?) title hints at the latter. Except this movie is neither. It is low-key, subdued to the point of disappearing. There is some slight humorous incident and dialogue. Nothing, though, more interesting than you might overhear sat quietly minding your own business in a student bar.

In one detail, and one only, this film resembles Animal House. That is the scene, in the latter, in which Donald Sutherland and John Christian Miller smoke pot, and speculate on the possibility that every atom in your fingernails might be a universe in its own right. Hey, man! Heavy!

Only the Animal House scene is funny, hilarious, because it is written to be so. It is a deconstruction based on the knowledge that left to their own devices, students – and their professors – will often descend to spouting intense nonsense.

The problem is, most of the dialogue, most of the very sparse incident in Shithouse, or Freshman Year is played straight. Or for the wry smile. And it is bo-oring!

Random meanderings, plus a little tension derived from Maggie's reluctance to admit, in front of friends, that she is in any way entwined with a younger man. So Alex's friend advises him to “play it cool” and ghost Maggie. Like that is going to help.

Perhaps it is my fault. I am old enough to be not just Alex's mum, but his grandma. Maybe this movie speaks to a much younger generation. Maybe it doesn't.

Apparently it spoke to the South by South West Film Festival (SXSW), where it scored a Grand Jury prize win for Best Narrative Feature. For a director so young – Cooper Raiff is just 23, so 21/22 when he made this film – that is achievement.

But it does not speak to me. 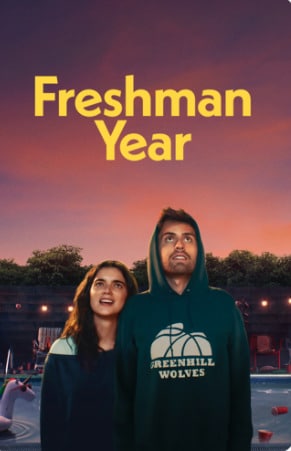 A lonely college freshman forges a strong connection with his resident assistant during a fraternity party.