Once upon a time, a small girl wearing red went into the deep, dark woods where the young wolves roamed and howled. It was a bad day for the wolves.

Tyler Shelds' surreal fairy tale is part morality play, part action thriller, all of it stylishly shot as you'd expect from the celebrated portrait photographer. Abigail Breslin plays the girl, Veronica, whom we first see at the age of five or six when a mysterious man is talking to her about good and evil. The two form a sort of contract - deeply disturbing when one thinks about it - and she spends the next decade training to fight, training to kill. The man, it would appear, lost his wife and daughter to a predatory man and has responded by preparing a woman to kill such men. Whether or not she might have preferred to choose her own destiny, when old enough to do so, we have no way of knowing.

Neatly groomed in more ways than one, smooth and sleek in every aspect, Veronica is perfectly suited to the part she has been given to play. She's a predator herself, and an early scene where she fluently manipulates the girlfriend of one of her targets suggests it's simply the code she's been given, rather than any innate sense of empathy, that dictates her choice of prey. That sense of amorality fits perfectly with the Fifties Americana that surrounds her. Milkshakes in a diner. Sharp suits. A pretty red dress. There's a timelessness about it all that adds to the sense of distancing from reality. Some horror fans will find it too arty for their tastes but it's not short on violence.

This time around - Veronica's first independent mission - she's targeting a group of young men who get their kicks by hunting young women in the woods. There's a certain elegance to it, as in all good fairy tales, a distillation of broader social violence into ritual form. Up among the trees, leather armchairs make them at home, create a sense of their ownership of this wild territory. Their suits, their wolfish smiles, and the petulance that comes to the surface when things don't go their way have a Bullingdon boy character; they're a privileged elite whose sense of entitlement goes beyond the objectification of women. Each gets his own heavily stylised introductory scene and each, in his turn, must face Veronica once the hunt begins.

Much of the imagery here gives the impression that Shields began with still images and gradually expanded them into moving scenes. There's no CGI involved; everything was done for real, with lights strung between trees and dirt and trip hazards everywhere, so the unreal atmosphere he's created has an additional later of magic about it. Sometimes the artificiality of the structure depletes the tension, but the actors do a lot to compensate, each managing to find an emotional trajectory even within an archetypal character.

Final Girl won't be to everyone's tastes but it's a bold attempt to do something different within the genre. From a technical perspective it's excellent and it gives Breslin the chance to show that she has the range to cross over from child stardom and make it as an adult.

Just be careful who you trust when you go walking in the woods. 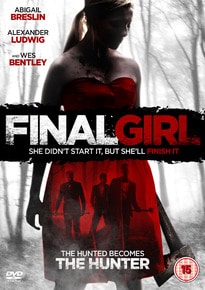 A highly trained assassin arranges to become the prey of a murderous gang on what will be its very last hunt.

The Company of Wolves