The Exhibition on Screen series was set up in 2011 with the aim of bringing art to a wider audience. Nine years later it would take on a new level of importance when the Covid-19 pandemic severely limited most people’s ability to go outside their homes for non-essential purposes. This just happened to coincide with the 500th anniversary of the death of Raffaello Sanzio da Urbino, better known simply as Raphael, when the largest ever exhibition of his works was being staged. Focusing on that exhibition, this film not only makes it accessible in spite of the impact of lockdown, but expands upon it to tell the story of an unusual man whose talents went far beyond painting.

The exhibition itself is laid out in reverse chronological order, displaying the works of the mature artist – which, naturally, include many of his most famous pieces – and then allowing the visitor to work backwards and discover the journey that led to them. Phil Grabsky’s film, however, works in the opposite direction, beginning with the artist’s childhood in the walled city of Urbino, where his father Giovanni Santi’s own artistic success granted him a lot of advantages, from material comforts and a good education to access to the materials with which he began to develop his own craft, and a network of connections which he was able to put to very good use in establishing the business side of his career. This latter is an aspect of the life of artists which the series has always been strong on, and Raphael seems to have had a gift for it, never suffering for his art but keeping himself comfortably on the top of the heap throughout his life.

To what extent does this explain his success? Even early works show that he wasn’t just lucky, but had a prodigious talent. The status he attained during his lifetime, however, was almost certainly aided by his ability to stay close to those with influence and power. The film, looks at his admiration for Leonardo Da Vinci, 30 years his senior, from whom he learned many of his skills, but also reflects on how he guarded his position – or had it guarded for him – referencing an incident in which another artist was beaten up for criticising his work. It looks at his broken friendship with Michelangelo and the resentment of other artists who felt they could never get a fair shot at the best commissions in Rome.

It is not possible to understand Raphael’s influence without knowing a bit about the history of the Eternal City, and this Grabsky provides succinctly whilst the camera dwells on some of its outlying structures, emphasising the sense at the time that it had lost its power and become a backwater of interest only as the home of the papacy. This leads neatly onto Raphael’s fascination with antiquity. The camera explores the Emperor Nero’s famous Golden House as we learn about how Raphael and Michelangelo were among the first to explore it upon its rediscovery, and how it inspired Raphael to look for artistic and architectural secrets which had been lost in time. This, in turn, brings us right up to date, with reflection on the importance of the artist as one of the first people to recognise that such ruins ought to be preserved, and a significant contributor to shaping the modern profession of archaeology.

A succession of other artworks and treasures are explored in telling this complex tale. We see a Crouched Venus sculpture from the 1st Century CE, and a collection of writings by Vitruvius which inspired Raphael’s later work. He, in turn, would influence the architectural style of the new Rome, including many of the buildings still considered marvels today. We also see the Sistine tapestries which he created and hear about how people reacted to them at the time.

It’s impossible to view these later works in a cinematic context without reflecting on how many modern film posters seem to be inspired by Raphael, who found increasingly efficient ways to condense stories into single frames, adjusting the size and position of figures and packing key objects around them to tell us what was most important. All that’s missing is the titles. It’s the expressions, though, that will stay with you, and which speak not only to the artist’s technical skill but to his humanity. Few before or since have captured subtle emotions so well, provoking such empathy in the viewer. Captured on film in turn, they allow viewers, no matter where they may be, to look into the eyes of figures who died centuries before they were born and connect with them. This is something rare, something real. 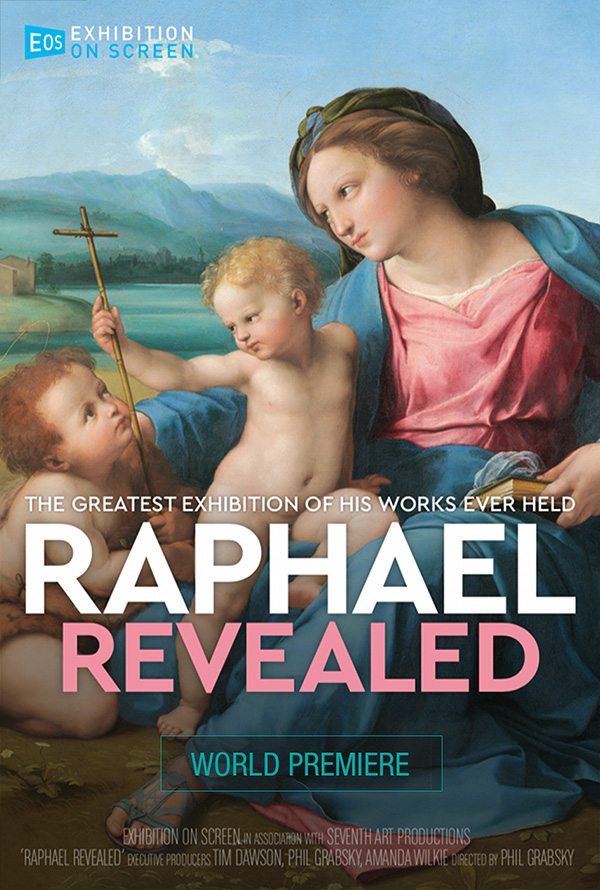 A documentary about the life and work of the artist Raphael.