Everything Everywhere All At Once

Evelyn Wang runs a struggling laundromat, lives in the cramped apartment above it. Evelyn is nearly estranged from her daughter, Joy. Evelyn is constantly at odds with her husband, Waymond. Evelyn is uniquely placed to save the multiverse.

Written and directed by the Daniels (Kwan, Sheinert), Everything Everywhere All At Once is bravura, high concept, unhinged and beautifully crafted. In publicity and interviews some members of its cast have compared it to other pictures rooted in exploring other realities but that's not a fair comparison. Not in the sense that this doesn't explore character through changes of circumstance, to that extent most stories do. More that the function of the journey over roads not taken here is to explore territories internal. It's also much better, to the extent that direct comparison feels like bullying.

Where Dr Strange's allusions and references seemed intent on spawning the kind of checklist content that's algorithmically recommended as "616 things you missed in..." EEAAO isn't just about having an abbreviation that sounds like a speeding car but using a kaleidoscopic set of lenses to look at a person, their relationships, their perspectives. However one gazes upon it is a triumph.

Michelle Yeoh is no stranger to genre(s), but here gets to run through a cavalcade. There's the gritty kitchen sink of a troubled marriage going through a tax audit. There's kung fu. There's a seam of seeming effortless cool, an ennui whose gloss conceals something romantic, hopeful, I've called it the "Wong Kar-Wai-verse" but you might see it differently. As an Evelyn among dozens, scores, legions, she is always herself, even when she isn't. It is an astonishing performance in a film full of them.

As Waymond, Ke Huy Quan has smashed back onto screens as if he'd never been away. After a debut as Short Round in Indiana Jones And The Temple Of Doom and cult kids favourite The Goonies, he did some TV before a sequence of successively longer screen breaks. In that time he served as an Assistant Director or equivalent on two films whose influence, conscious or otherwise, on this one is palpable. Wong Kar-Wai's own 2046 and Jet Li fights parallel versions of himself action-nonsenser The One. That's two number films and from that comes a temptation to try to render this film's title in mathematical notation.

Extending the set, Waymond and Evelyn have a daughter, Joy. Stephanie Hsu is much earlier in her career, but no less talented. She had a small role in Shang-Chi and the Legend of the Ten Rings. She's also had a recurring role in The Marvelous Mrs. Maisel. Her grandfather, Gong Gong (James Hong) is visiting. Another source of antagonism, is Jamie Lee Curtis as IRS auditor Deirdre Beaubeirdre. That name only appears in the credits, but there might be backstory to explain that the Bananafana D'Audeirdre was dropped at Ellis Island. I say 'source', as if conflict must always be something external, but it isn't. Not always.

I would put this in the same bracket as Colossal, as Sorry To Bother You and maybe even the Fifth Element. Whole-hearted, unashamed, joyful, bonkers. A love letter to certain kinds of film-making and certain kinds of story absolutely rooted in craft and care. Even when it's gleefully out of tune, thinking specifically of a reference to 2001: A Space Odyssey, it's note perfect. James Hong's performance(s) at time recall Ricardo Montalban's turn as Grandfather in the Spy Kids franchise. In Spy Kids 3 there was that thing about someone being 'the guy'.

Evelyn is 'the guy'. The one who will stop Jobu Tupaki. They are the end of the Multiverse, the collapse of all possibility. Yin and yang and win and Wang. An everything bagel of despair against the googly eye of hope. If that sounds ludicrous, it is, and it doesn't matter. That name, Jobu Tupaki, is nonsense from a marriage. If one digs enough through various languages and gives it a little wiggle it could be Estonian and Welsh for 'bastard outhouse' or in Telegu perhaps 'pocket pistol' or through Japanese and Turkish 'part-time palace'. There are only so many phonemes, they'll inevitably overlap with morphemes. That inevitable overlap and the meaning from we take from it is one of the hearts of the film.

You'll get stuff here you'll get nowhere else. Comedian Jenny Slate using a dog as a meteor hammer. A TV musical romance playing over a bank of washing machines. Hot dog fingers. An improbable design for a trophy that's supported by later discoveries about background characters. Rocks. A malapropish Disney film. A tense family drama about the way that parents fail their children as their parents failed them. A pile of receipts. Two divorcees sharing a vape pen. An array of costumes (Shirley Kurata) and hair and (FX) makeup (Michelle Chung, Anissa Salazar, Hiro Yada et al) that rivals productions like Jupiter Ascending but done in a fraction of the space (and time, and budget). Kung fu. Bagels. Wrist-splints and their equivalents. Googly eyes.

Larkin Seiple's cinematography manages transitions between realities while never feeling more unreal than it ought. Like the Daniels (with whom he worked on Swiss Army Man) he's a music video veteran. Son Lux contributed music to Looper but the score here demonstrates the band's flexibility and variety. Those two are watch-words for the film, even at an MCU-rivalling 139 minutes it rattles along, hypnotic, delirious. There are moments of stillness in opera alleyways, frenetic chases involving hats and animal control, tearful reunions, a neighbourhood party.

The focus across the three chapters (coincidentally Everything; Everywhere; All At Once) isn't singular. In a film of multiples it's doing several things, backwards, and in a repetitive strain injury support. The multiverse gives it something to build a voyage of self discovery into, metaphor made all-consuming elemental force. It's not just full of reference and irreverence but self-reflection, like the clockwork escapism of Hot Fuzz, each movement is an echo of something previous, a repetition not tic but tick. A24 have a habit of presenting their logo in different forms, and that almost seems a reflection of the film. A high water mark for the things that cinema can be and can do, see this, near you, and soon. 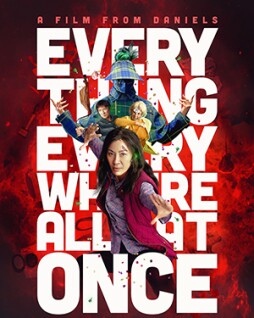 A science fiction action adventure about an exhausted Chinese American woman who can't seem to finish her taxes.

All The Women
Everything Is Illuminated
Everywhere And Nowhere