In some countries, riots are the norm. They can go on for years, even decades, in spite of violent crackdowns by the police or military, before anything changes. In the meantime, the rest of the world still has to deal with that country, which means diplomats still have to work there. Whilst they may not exactly relish this, it’s something they learn to take in their stride, especially when important matters are at stake. For South Korea in 1991, becoming a member of the United Nations meant everything, and in order to achieve this, they needed to win the support of African leaders. In Somalia, this meant an awkward stand-off, with North Korean diplomats doing everything they could to sabotage the process – but when war reached the capital, an extraordinary alliance would offer the only hope of survival.

How does one recognise war in a country where violence is already commonplace? From the very start of this film, members of the South Korean embassy staff are nervous, but Ambassador Han Shin-sung (Kim Yoon-seok) is dismissive. The trouble they’re seeing on the streets has happened here before, he says. It probably doesn’t mean anything. He’s more concerned about getting an audience with the president so they can achieve their mission. In the North Korean embassy, his counterpart, Ambassador Rim Yong-su (Huh Joon-ho) is a little more wary, but has even fewer options. It would take a really extreme situation for his country to pull him out, and he cannot afford to look disloyal.

Because of the rivalry between them, each embassy has acquired a secret service agent to aid its mission. The South Korean Kang Dae-jin (Jo In-sung) is suave, sophisticated and sometimes underhanded, not always appreciating the ways in which his agenda may hinder rather than help Han’s. North Korean Tae Joon-ki (Koo Kyo-hwan) is a little more hot-headed – loyal to a fault but not always, well, diplomatic. It’s all the older men can do to keep these agents for getting into a fistfight in peacetime, let alone when the rebel army enters the city and the smallest mistake could cost the lives of everyone in the embassies. Still, there’s an almost erotic tension between the agents, each secretly full of admiration for the other’s skills. They are both willing to risk their lives to protect their people. A different kind of courage is required of the ambassadors, though before long they too will be in physical danger.

Though this film is based on real events, it’s full of parallels which speak to the broader situation between the two peninsula states. There’s a widespread belief in the West that they’re divided purely because of the totalitarian politics of the North, which is true to a degree but overlooks the big disincentive for the South to try and change the situation: South Koreans enjoy a high standard of living which would be lost if they suddenly had to share their wealth with millions of impoverished northern neighbours. Will the South Koreans in the Mogadishu embassy be willing to help their northern counterparts when they are already under siege and low on resources? What additional risks could they face if they choose the humanitarian option?

Whilst North Korean militarism is often derided, it comes in useful here, as do the sort of improvisational skills acquired from the experience of poverty. The film is notably even-handed in its representation of individual characters, despite having a South Korean central perspective and clearly favouring that way of life – a framing bias which may, in fact, serve to protect those real North Koreans who made it home from Mogadishu. Bother Korean groups are presented as privileged in that they are well educated, initially well resourced and have foreign governments which may be willing to help them if they can only make the necessary travel arrangements and get to the airport. Both ambassadors witness first hand what’s happening to ordinary Somalians with no such advantages in scenes which are more powerful because the horrific violence is kept in the background and much is left to the imagination. This puts their own troubles and those of their people into stark perspective, whilst sending a clear anti-war message to the viewers at home.

We don’t get to spend much time with Somali characters or learn much about the politics behind the war, which enhances the feeling of disorientation and panic which the film is trying to build but risks making the Somalians seem like savages. Mitigating against this are a handful of well played supporting roles, helping us to recognise the humanity of those dying in the background. South Korea is currently experiencing a wave of Islamophobia and anti-refugee sentiment much like that in the UK, so the film has a difficult line to walk when addressing the role of religion in the Somali conflict. Scenes in which the Koreans take advantage of the call to prayer to move around whilst others are occupied are ambiguous. Those praying are quick enough to pick up their guns again afterwards, but on the other hand, the serenity of the moment itself fits in neatly with the film’s overall call for peace and civility.

There’s some heavyweight acting talent in this film but nobody hogs the limelight and the cast works well as an ensemble, thanks in part to a script which neatly balances the action between them. Despite the main players being men, an effort has also been made to give the female characters – embassy staff and wives – something to do, and to give weight to their perspectives. Lacking the training of the men, they are more susceptible to the propaganda issued by both peninsula governments, which gives the actresses interesting material to work with as they gradually unpack it and form connections.

Overall, director/co-writer Ryoo Seung-wan brings a lot of intelligence to bear in what could easily have been a lightweight action film. The action scenes, when they come, are much more gripping because we’re invested in the characters, but Ryoo’s direction is a powerful force in itself, and you’ll be on the edge of your seat through the final car chase. Credit should go to the stunt team for some exceptional driving. This is on a par with anything you’ll see in Hollywood, without relying on CGI. Escape From Mogadishu is up there with the best action thrillers of recent years, and if you’ve yet to discover what South Korean cinema has to offer, prepare to be amazed. 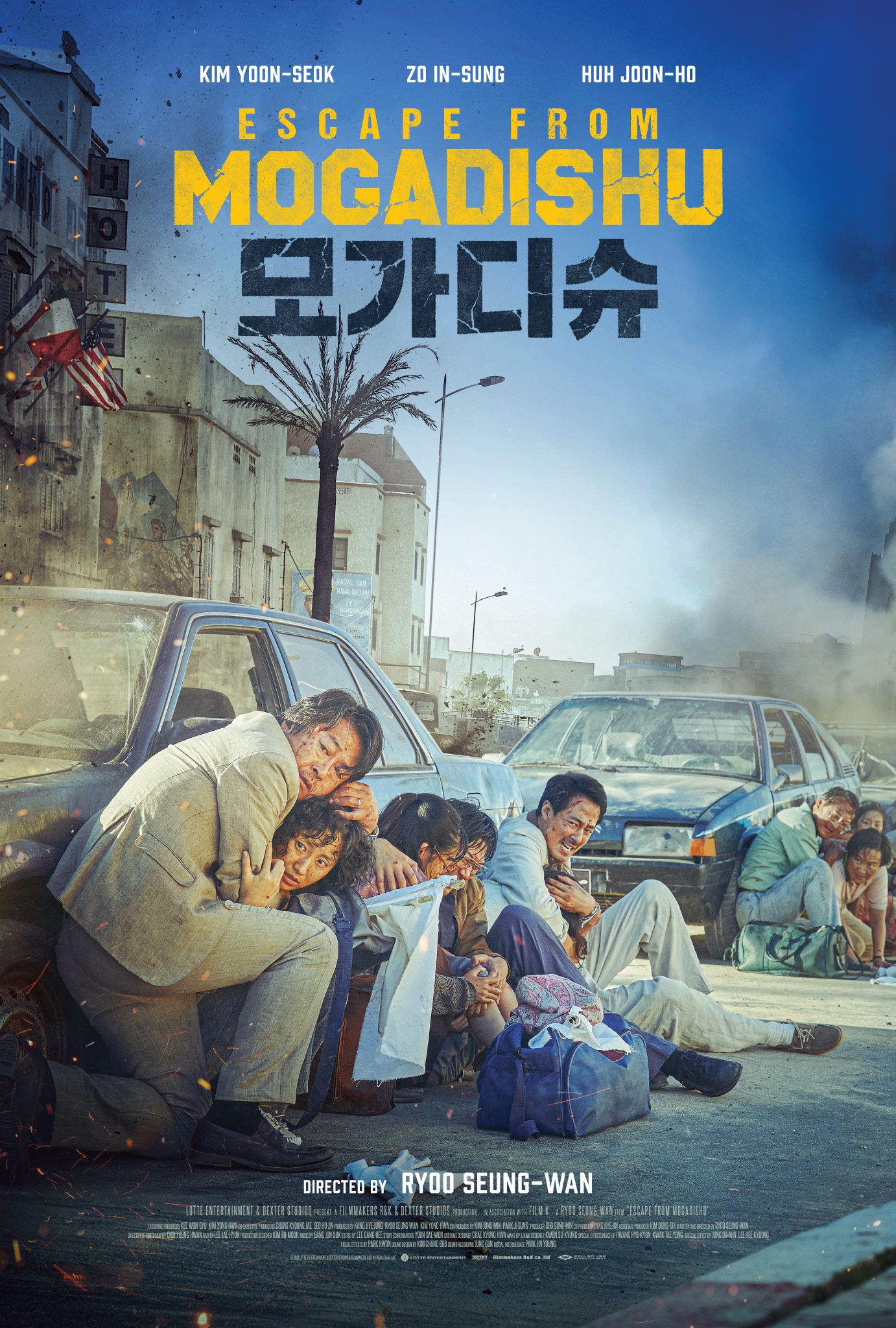 A dramatisation of events in 1990 when diplomats in the South Korean embassy found themselves trapped when war broke out in the Somali capital.