Surrounded by mountains, a hidden village. Within it a house, occupied by gifted individuals. They are the family Madrigal. They are magical.

They aren't though. Indeed, though enchanting in a beautifully animated Latin-American musical, they are catchy, carefully constructed, complex. The film itself has somewhere around six credited writers, including director(s) Jared Bush (Zootopia, Moana), Byron Howard (Bolt, Tangled), and co-director Charise Castro Smith (some TV, feature debut behind the camera). Add Jason Hand whose animation credits include many of the films just named, Nancy Kruse who shares some too, as well as Wreck-It Ralph and also his wrecking of the internet, and one of the bigger influences, Lin-Manuel Miranda.

You'd know it even if it weren't written, his songwriting style is distinctive. The staccato rap patter bubbles in crisp batter flavourful crunch around the meaty chorus. The soaring florid. Borrowing here there and everywhere homage is not mirage. There's credit in credits for Kristen Anderson-Lopez and husband Robert, they penned Let It Go and I'll let you know you don't need to stay to see, no scene after them so you can safely flee.

Miranda's influence is now not just from but on Disney. He's contributing to whichever iteration of The Little Mermaid that, apocalypse pending, is due 2023. He contributed to Moana and you can draw a line from the success of Hamilton and the production of In The Heights the cells on spreadsheets that meant Spielberg got to celebrate West Side Story's diamond anniversary with a remake.

More films should deliver exposition in the form of song, to a chorus of (over-)caffeinated kids who state that it is "physically impossible to relax". One might not get the jitters but toes will tap, as Mirabel (Stephanie Beatriz) introduces the family Madrigal. Not just their names, but their magical gifts. The family Madrigal are the protectors and powerhouse of the village, their intercessions fuelled by 'the miracle'. One guarded by Abuela Alma (María Cecilia Botero), matriarch, mother to three gifted children who fruit the fantastic family tree.

I shan't run through them all, not least because the film does it better. The song doesn't speak about Bruno though, but John Leguizamo sounds like he's having fun. Apparently Alan Tudyk has added another ornithological role to his credits, but I wouldn't have known unless I looked. Two can play a game, but in a succession of duets it's clear that there's more to do than that. Jessica Darrow's song as Luisa about the pressure of being strong was a delight to me, but others will doubtless find other songs as powerful.

It's glorious. I could bore with the way that it works around predestination and prophecy paradoxes, the charm of a computer animated lenticular hologram, the presence of dualities including a song (Dos Mariposas) sung wholly in Spanish across a moving scene and then re-sung mostly in English (Two Mariposas) across the credits. That's 'butterflies' but that's another pair, the implicit 'before' of metamorphosis.

It looks great, the capybara have that air of glaikit dignity, there's a leopard leaping, sinister creeping, the Casa Madrigal is itself magical and every tile of it tickled. The songs are fun and there's comedy of every stripe, fast and bulbous. It is breezy, bright, brilliant.

It does also get dark. The second act swing is a deep one. There's even a pretty effective jump scare that is swiftly soothed, but this is in the context of a PG rating for "mild threat" which is an upgrade (I think?) from "mild peril". That might be a consequence of temperature, as the latter went to March Of The Penguins and Polar Express. It might also be a consequence of the story though, the stakes are at times as high as the mountains that shield the village.

Madrigal comes via Italian from the Latin 'matrix', womb, cognate with the maternal and primitive, becoming 'a simple song'. Maternal, certainly, even grand-maternal, and massively involved with the filial and familial, sorority, conformity, conflict. Encanto translates properly as 'charm' and the film has it in abundance. 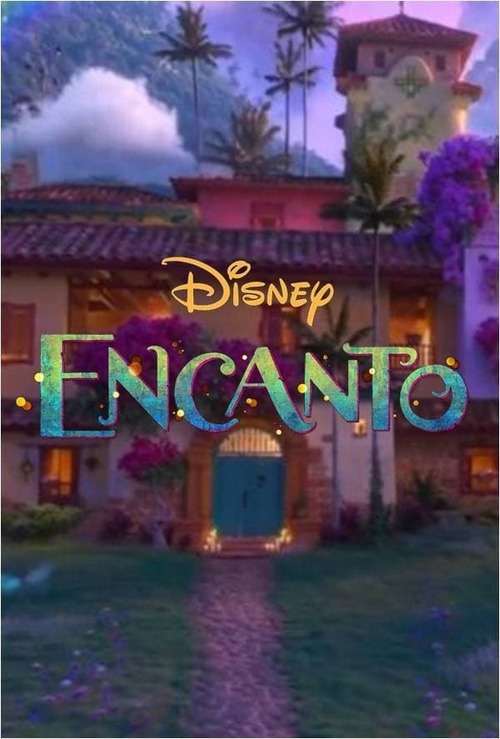 A young Colombian girl has to face the frustration of being the only member of her family without magical powers.

Far From The Tree
Frozen
Sing