Edge Of The World

Is there a place in cinema, today, for the kind of adventure stories which dominated the screen during the mid 20th Century? Even Marvel has had to acknowledge that the antics of its Avengers inflict a cost on bystanders, their homes and cultural values. The idea of the world as a playground for the rich is now seen less as glamorous and more as monstrous. Tales about the bold explorers involved in the expansion of the British Empire are now recognised as intrinsically bound up with oppression and brutal violence. There were, however, a few men who stood against the Empire's worst excesses even as they served under its banners, and their stories seem tailor made for audiences seeing a less problematic exploration of those days.

Among those men was James Brooke, the inspiration for Lord Jim and The Man Who Would Be King. This film picks up his story some way into his years as an adventurer, when he has already left one marriage, at least one illegitimate child and the goodwill of the British establishment behind. Washing up on the shores of Borneo with practically nothing to his name, he is captured by headhunters, but his rakish charm and ability to keep his cool soon see him delivered into the hands of the local princes - and in due course, he attains a kingdom of his own.

There's a great tale to be told here, but Michael Haussman's film, doing its best to stick to the known facts, struggles to generate the energy one might expect. It relies heavily on Jonathan Rhys Meyers in the central role, and whilst he's certainly charismatic - despite a serious effort by the make-up department to reduce his natural prettiness - he can't sustain the pace all the way through. The result is a film with an interesting story which doesn't exactly do anything wrong yet, despite some great moments, falls some way short of its potential.

Part of the problem is that there is so much story, and screenwriter Rob Allyn, whose No Man's Land was released just a week earlier, is not (yet) an efficient enough writer to bring all is constituent parts together and put flesh on the bones. There's not much that's completely unexplained but viewers will need to pay close attention to keep track of everything that's happening as political alliances - both local and international - are shaped and reshaped. This leaves limited room for character development. There's solid work from Dominic Monaghan as Brooke's cousin and temporary second in command, whilst Atiqah Hasiholan convinces in the difficult role of the local princess who becomes his partner, but others come and go without us ever really having the chance to get to now them.

Shooting in thick jungle in Malaysia has limited Haussman's framing options - there are few opportunities to observe from a distance, let alone take in the horizon, and this has the effect of making the drama seem more insular, Brooke's kingdom less grand. It does provide the perfect setting for ambush scenes, however, and these are handled well, as is the threat posed by headhunting. The culture behind this is explained well and Haussman does a pretty good job of balancing respect for local peoples - from whom Brooke has a lot to learn - with condemnation of particular traditional practices maintained by some of them. Another of those is slavery, to which Brooke strenuously objects (as he did in real life). The parallel with the behaviour of the British Empire is more noteworthy because it gives the local nobility the idea that they understand how that system works, perhaps well enough to ally with it, leaving Brooke desperately trying to warn them that if they get too close it will destroy them.

Mixing many of the staples of old-style jungle adventures with this more sophisticated political outlook, Edge Of The World does a good job of updating the genre (though it's not the first to try), but you'll get more out of it if you're familiar with the story to begin with. Haussman can't quite decide between vérité and romance, ending up with an awkward middle ground. One can't help but feel that this might have worked better as a series, giving him more room to explore. Still, it's a bold attempt to revive a style which retains the ability to thrill. 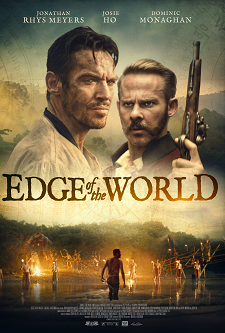 The story of James Brooke, who defied the British Empire to rule a jungle kingdom in 1840s Borneo, and embarked on a lifelong crusade to end piracy, slavery and head-hunting.