Alongside Andrew Bujalski, Mark and Jay Duplass, Lynn Shelton, Aaron Katz and Ry Russo-Young, Joe Swanberg has been one of the key directors in the post-millennial independent film movement known loosely as 'mumblecore', characterised by low budgets, naturalistic dialogue and a probing honesty about relationships. He is also a fine actor in his own right, often starring in his own features (in this latest, Drinking Buddies, he cameos as a pugnacious driver) - and he has been supporting the acting talents of Greta Gerwig since the very start of her career in films like LOL (2006), Hannah Takes The Stairs (2007) and Nights And Weekends (2008). While his appearance as Drake in Adam Wingard's 'mumblegore' You're Next (2011), or his performance in one episode (Second Honeymoon) and direction of another (The Sick Thing That Happened To Emily When She Was Younger) in the found footage anthology V/H/S (2012), may be the closest that Swanberg has come to your local multiplex, his other films have long been a welcome fixture on the festival circuit.

Drinking Buddies, however, could well be Swanberg's breakout hit, with its breezy observational comedy, not to mention the mainstream appeal of Olivia Wilde (TRON: Legacy, Cowboys & Aliens, In Time). Never better than she is here, Wilde plays Kate, who works, drinks and banters with Luke (Jake Johnson) in an independent brewery in Chicago. They are, despite their obvious chemistry together, just good friends, not least because they are both attached to others. Kate has been seeing the older Chris (Livingston) for several months, and loves to go to his place after work, even if she is less keen on staying all night. Meanwhile, Luke has lived with his girlfriend Jill (Anna Kendrick) for many years and they have vague plans to get married eventually.

The four spend a weekend together in a beachside house, where Luke and Kate get up to their usual drunken play, while Chris and Jill share a significant moment out picnicking together in the woods. Not long afterwards, Jill suddenly asks Luke to start thinking seriously about marriage, while Kate finds herself single again. With Jill away for a college reunion, both Kate and Luke take the opportunity to reassess their relationship.

Swanberg provided his performers with a narrative outline rather than scripted dialogue, and left them to improvise their way through every scene. What might in lesser hands have been an aimless, stilted disaster here becomes, thanks to these capable, funny capable actors, a finely observed naturalist comedy of manners. It is also a slyly inverted romcom, with erotic desire in fact the obstacle that must be overcome if these two friends are to be reconciled. In the end, the title is everything - for rather than fill itself with incidents and events, the film is more like a dynamic portrait, limning the seemingly straightforward yet fragile relationship of its drinking buddies, now in broad strokes, now in fine nuances, but always in a manner that feels true to life. 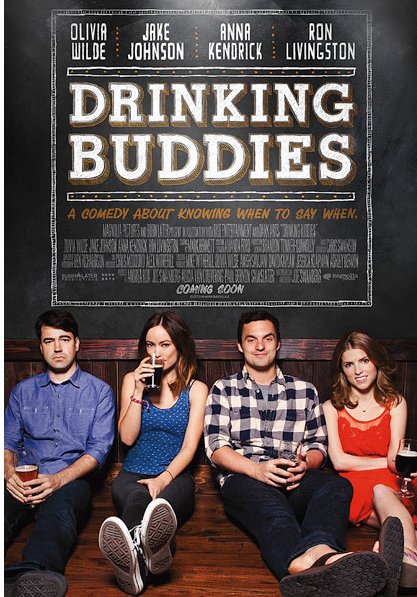 Bar-fuelled intimacy between two brewery workers blurs the line between friendship and romance.