Dreams of A Life

In 2006, the body of Joyce Carol Vincent was found in her London flat, perched on the couch in front of a television that was still on. She had died three years earlier, at the age of 38. Nobody had noticed she was missing.

It's a tragic and intriguing situation, and it's not surprising that it attracted a lot of attention. Documentary maker Carol Morley did an impressive job of tracking down people no-one else could find - not people who could explain how Joyce died, but witnesses to her life. Here they talk about the woman they knew - or thought they knew - and try to understand how she came to be so isolated.

Although much of this story is comprised of talking heads, Morley does a good job of framing it, with the suggestion Joyce herself might be watching them on that post mortem television a haunting touch. Zawe Ashton turns in a effecively understated performance as the deceased woman, conveying emotion without ever pushing too hard t the central mystery, at Joyce's unknowableness.

Unfortunately, other aspects of the film are not so subtle. Rather than considering the range of possibilities that make the case so fascinating, it quickly settles on a particular narrative and then pressures the facts to fit it. It's an old, old story, but in cinematic tradition it dates back to Louise Brooks in Diary Of A Lost Girl, the idea that a woman who appears to be living life on her own terms, especially if that involves partying and promiscuity, must secretly be falling apart. Yes, there is evidence of difficulties in Joyce's life - the early death of her mother and a period spent in a refuge for battered women - but these are, sad to say, events that take place in many lives, and they're insufficient to substantiate the morbidly romantic assumptions made here. Ultimately, Joyce might have been an averagely satisfied person who just got unlucky and had an asthma attack when no-one was around. The testimony here suggests that she was not sought out not because she was not loved but simply because she tended to drift - everybody figured they'd bump into her again in a few months. When the different explanations she gave for impending absence are treated as mysterious, we must wonder if she was simply telling people what they wanted to hear, if she preferred to keep a bit of distance.

Through its title and its use of an actress, Dreams Of A Life does acknowledge that it is speculation, and in a sense it is more about how people perceive the dead - or even the living - than about the realities of its ostensible subject's existence. In this regard it is an interesting piece of work, despite some slow parts. There's some really moving stuff from those who were closest to her, and through their words we get little hints of her personality. But most speakers here seem to come from quite a sheltered background, limiting their perspectives. Some express horror that Joyce spent time working as a cleaner, when of course many people do jobs like that throughout their lives. Several focus on her physical attractiveness without anyone raising the question of how this might have impacted her feelings about other people, her tendency to disappear sometimes when friends were on the brink of expressing desire.

Eventually the question is raised: was Joyce real at all? Did her friends just imagine her? And therein lies the crux of it. The myth of the unknowable other has found its perfect subject: made stll more glamorous by her liminal celebrity, unable to speak for herself, Joyce becomes a focus for the social anxieties of others, an impossible archetype of projected womanhood. Relief comes in the possibility that the real Joyce has escaped objectification because, for all the memories and musings, we barely glimpse her here at all. 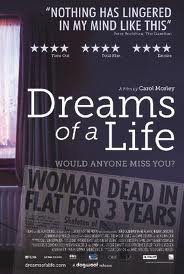 The intriguing story of a woman discovered in a London flat three years after her death.