Billy (Ronnie Gene Blevins) isn't really ready for parole, the panel agrees. Remorseful though he is, he doesn't seem to have fully understood the impact of the crime he committed; he's still at risk of responding to stressful situations with violence. He's allowed out of prison purely on compassionate grounds, because his mother (Lara Flynn Boyle) is dying of liver failure. She hasn't told him, hasn't wanted to worry him. She has only a few months left. It's highly unlikely that a compatible liver will turn up in that time, her doctor says. But if Billy were not concerned about ethics, and had a lot of money, he does know a doctor across the border in Ciudad Juárez...

There are a host of good performances in Scott Windhauser's earnest thriller, but the story and dialogue are so ridiculous that the stars really have their work cut out for them. Of course Billy isn't going to sit back and let his mother die. Of course he's going to look to violence to solve the problem. After pouring his heart out to the usual busty blond bartender with attitude, he goes looking for bad guys to rob so that he can keep on telling himself he's a good guy, but in the process he crosses Bruce Dern's sleazy plantation owner mob boss, whose way of doing business makes revenge not just a pleasure but an outright necessity. Cue a series of stand-offs, fights and torture scenes before the film shifts gears for an ending which, though you'll see it coming a mile off, still manages to astonish in its triteness.

Considering its similarly poor dialogue, the film feels as if it has been made based on an early draft of a script which really needed more work. There are a handful of scenes which are much stronger, notably when Billy's mother starts flirting with a cleaner (Stephen Lang) in her hospital ward. Though she remains a largely passive character, as one would expect with somebody that ill, this effort to flesh her out is welcome and really pays off in terms of making us care what happens to her for her own sake, not just her son's. Boyle has had a number of misfires over the course of her career, but here she really delivers, and she has great chemistry with Lang.

The other main performances are similarly impressive. Blevins may be playing a cliché but he brings a certain freshness to it. Dern, meanwhile, delivers lines which would make lesser actors cry with such conviction that one barely notices the words, only the intent. There's no depth to what he's been given but he's still tremendous fun to watch.

With handsome cinematography from Jonathan Hall, the film almost but not quite manages to distract viewers from its underlying silliness. If you go into it without expecting too much, you'll find a fair bit to enjoy. 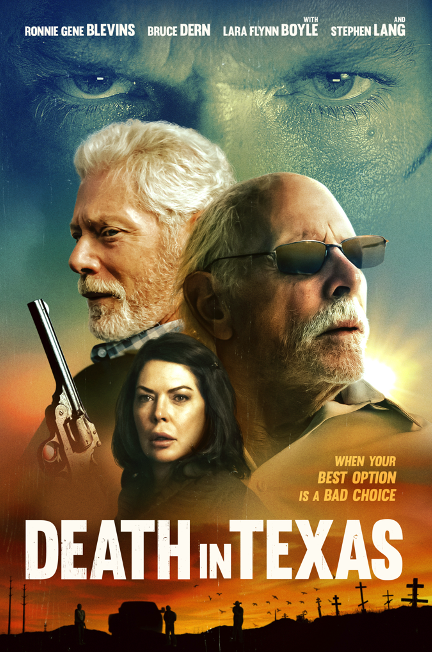 Recently released from prison, Billy will do whatever it takes to save the only person who has stuck by him, his mother Grace who desperately needs a liver transplant and she is all out of legal options.