Jake (Eric Tabach) dreams of becoming a reporter. He doesn’t have the cheekbones of established journalist Tim (Zachary Booth), whose footage he edits, so he’s trying to work his way up through the application of his technical skills. On this occasion that means building a report out of pre-recorded interview material and dashcam footage which is supposed to be being released by the police late at night. When the footage arrives, however, there’s another link with it: one marked ‘confidential’. It appears to have been sent in error. Immediately downloading the files it points to, Jake sees the opportunity for his big break.

Part of the new generation of internet-bred journalists, Jake appears to have had neither formal training nor proper mentoring. He knows that reporting begins with asking what, when and where, but is less clear on the proper way to ask how and why. Significantly, he fails to apply these questions to his own circumstances. How has this material been assembled? Why has it turned up in his inbox at this particular time? A phone call from a sinister-voiced stranger urging him to delete any sensitive material that he may have mistakenly received only excites him more. It doesn’t help that his girlfriend, with whom he communicates by video call, is convinced that the incident concerned in the report involves a government cover-up.

What really happened to sleazy attorney general Lieberman (Larry Fessenden) on the night when he was pulled over by the police? What was the sequence of events leading up to his death? This is the central mystery that draws viewers into the film, just as it captivates Jake, but most viewers will soon realise that there’s something more going on. For some this will be a satisfyingly clever little thriller whilst for others the real interest will lie in the psychology of the characters – notably Jake himself – and in its satirical portrait of the modern media world.

With much of the film presented in screen format, so that we’re looking directly at what Jake can see on his computer, the action will be particularly immersive – and amusing – for people who have personal experience of editing video footage on Macs. It’s sufficiently well worked out that you shouldn’t have difficulty understanding what’s happening if you lack that background, but director Christian Nilsson has a difficult balance to strike in making the pacing work for these different audiences. He comes from a video editing background himself so is fluent in the technical side of things but there’s that awkward factor which always presents itself in such situations, whereby it’s hard to know how interesting or intelligible one is making for others what is second nature to oneself.

All in all, Dashcam handles these difficulties well, with a smart script (also by Nilsson) which builds characters well even when making jokes at their expense. Anyone who has ever struggled to get ahead – which, let’s face it, is most of us – will relate to Jake’s excitement, but it’s also easy to see the ethical dilemmas this generates and how it serves to distract him from important details. What really matters – the truth, or his career? In the end, will he be able to make progress with either? And what if he really could be doing so at the expense of national security?

A wonderfully economical film, shot mostly in one room yet quickly generating the sense that big things are at stake, Dashcam will solidify the reputation that Nilsson earned with his 2020 short Unsubscribe, and it marks him out as a filmmaker with big potential who is more than usually willing to grapple with the changing social frameworks of the 21st Century. 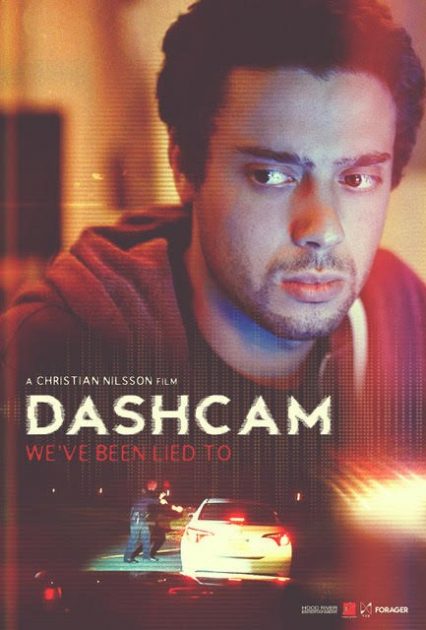 A news editor, working from home, unexpectedly receives secret footage which gives him a new perspective on an incident in which an attorney general was killed.