Australian genre hybrid Crawl, the feature debut of writer-director Paul China, scores high in the derivative stakes but low on satisfaction. With brother Ben on producing duties, China's claustrophobic neo-noir, part crime drama, part home invasion thriller, ultimately does little but push you back in the direction of the movies it liberally pays homage to. Chief among those, as other reviewers and Crawl's marketing team have noted, are the Coen Brothers' own debut, Blood Simple (1984) and their multi-award winning No Country For Old Men (2008). While the comparisons in style, tone and structure with those movies and/or their characters are clearly warranted, unfortunately there is nothing on show in Crawl to suggest the brothers China can go on to emulate the careers of Joel and Ethan.

Crawl's tale of a contract killing, a 'quirky' monosyllabic assassin, the seedy, coke-snorting bar owner who hired him and the young waitress inadvertently drawn into the aftermath of the hit is familiar even without the overt references to the Coen's vastly superior offerings. The most obvious problem with China's film is that the lead characters are either sketchily drawn out or leaden stereotypes.

Beyond George Shevtsov's predictably 'enigmatic' hitman, Paul Holmes' bar owner Slim Walding is little more than a stock-in-trade slimeball, while Georgina Haig as waitress Marilyn Burns (note the nod to The Texas Chain Saw Massacre) fails to lift her role above its two dimensional quality; that of girl-next-door placed in life threatening danger. The home-invasion section of the movie works far better than the surrounding narrative, with Marilyn forced to take drastic action under severe duress to protect herself from the hitman. His arrival at her home, however, after a geographically nonsensical car accident set up involving the Croatian killer and Marilyn's boyfriend, points to an ill thought through screenplay. Minor characters and sub-plots are introduced and then dropped seemingly without rhyme or reason, leaving the impression that a lot of padding was required to make the narrative fill its brief 80-minute running time.

As an exercise in creating mood and tension China's film works marginally better, prolonged silences generate a certain amount of suspense and the decision to eschew one of the traits you expect to see employed in Australian movies – shots of sweeping landscapes – helps create the air of enclosed oppression required for the movie's latter home-invasion scenes. A fatalistic air runs throughout, as all competent noir-infused movies should exude, but the script never rises above ho-hum and an elongated sequence in which Walding sexually humiliates another of the bar's waitresses seems to be included for its own dubious sake rather than as an integral part of the narrative.

Predictable in its climax and underwhelming in its ambition, Crawl will struggle to make an impression either in theatres or on DVD/Blu-ray. What China hasn't been able to achieve is the, admittedly difficult, art of taking a simple, small premise and imbuing it with a sense of epic importance and emotional resonance, such is the shallowness of his characters. 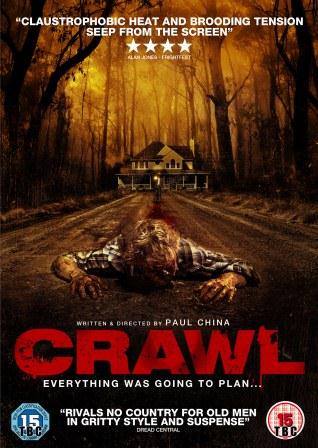 When a garage owner hires a mysterious hitman to dispose of his business rival, things go from bad to worse.