The aforementioned vintage camera wanders the halls of the bland hotel where the convention takes place, attaching itself onto an oddball character or two for short periods of time. Here at the conference, freaks and geeks, and maybe tomorrow’s Steve Jobs, have assembled to pitch their machines into battle against a variety of human and computer players in an attempt to answer the burning question of the day - can a machine outthink a human at chess in the final round?

As the tournament grinds towards the final, the various bespectacled, short-sleeve shirt rocking eccentrics wander around the halls and into and out of rooms, colliding with each other and crossing over at times into a trippy couples therapy group hiding out in the conference room. Ideas are shared, programs and subroutines rewritten, longing glances exchanged, and the occasional bit of acid dropped. Here, Bujalski shows us, lies the odd birth of the computer, this is nerdism 1.0.

The goings on are very funny in places, especially as we see the clunky washing machine sized computers being wheeled into battle, only to then fail spectacularly to execute even a basic chess move. Despite some intriguing and humorous characters populating the hotel, such as the eternal freeloader Michael Papageorge, it's the boxy Apple Mac precursors that are the real stars in many ways. It's hard not to feel a warm glow of affection for them, assuming you are a viewer of a certain age.

In its final act Bujalski’s film takes a somewhat more surreal and challenging turn, leading some film critics to call it a kind of 8-bit Last Year In Marienbad, laden with subtext. Here some viewers may get a bit lost. Is the hotel a kind of metaphor for a giant computer of some kind, where people bounce around like programs? Is the couples therapy group representative of a more humanist approach whereas the tech heads are more than comfortable to put their chess games, and much more, in the hands of a machine? Is this some kind of satire on how our technology saturated culture ultimately was built on the shoulders of people who could barely manage to utter two sentences without being crushed by their own social awkwardness? Either way, it is clear Bujalski is trying for something more than a simple analog nostalgia fest. 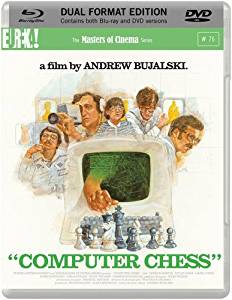 Early nerds congregate at a convention with a surreal twist.