Look. It's a musical. Not one of the blockbusters. Not yet, at least. It lacks a complete belter of a song, on a par with Frozen's Let It Go”. Well, almost. And I've never seen it in its entirety before, just random clips on YouTube. But, look...

...it's a musical! So how could I not enjoy Come from Away? It is a film of a live stage recording of Irene Sankoff and David Hein's 2017 musical of the same name. Originally intended to be a film musical, to be released in time for the 20th anniversary of 9/11 in September 2021, the production company scaled its ambition back down to what it is, due to Covid-19. Also, I guess, because there just wasn't enough time to put together a whole musical from start to finish in the limited time left and still hit that deadline.

So what you get is exactly as it sounds: a camera – several cameras – turned onto the stage during the performance and shooting from start to finish.

The musical itself is based, loosely, around the true story of 7,000 passengers stranded in the small Newfoundland town of Gander, where they were housed and welcomed, despite the fact that their arrival almost doubled the local population, after the 9/11 terrorist attacks.

It is simple; it is cliched; it is a series of vignettes based around the stories of a handful of passengers. September romance. Suspicion – because amongst those landed, inevitably, are foreigners, including Muslims and they, naturally, are under scrutiny in the hours following the attacks on New York. There are tears and fears – how to get in touch with relatives to tell them you are safe and how to find out if relatives who were working in New York on the day were safe.

And that's just the passenger side, because there are just as many stories to tell about the inhabitants of Gander itself, not the least being the good-heartedness of the townspeople.

It's a happy, celebratory sort of musical without a villain. Because, of course, the villains all perished off-stage, before the action started. So, many of the tropes common to musicals, common to drama, are, of necessity, absent. Still, there are highs and lows. There are tensions. Between the mayor of Gander and the bus drivers union, for one. Though that gets played for comedy.

It is, too, an ensemble piece. There are plenty of fine singers and actors, including Petrina Bromley, De'Lon Grant, Joel Hatch, Tony LePage, and Caesar Samayoa all taking on multiple roles, with no single lead.

It has, as well, a certain kinship with musicals such as Billy Elliot. That is, centre stage are the people: in Billy Elliott, the miners; here the passengers and townsfolk. Not beautiful. Not young. Not glamorous. Just ordinary and raised up for their ordinariness.

There are memorable songs. The one that pulled me in before I even knew Come from Away is the uber-poignant Me And The Sky. Here it is sung by Jen Colella, in the role of Beverley Bass, who was not only an actual American aircraft pilot and first female captain of an American Airlines commercial plane, but one of the pilots who flew into Gander on 9 September 2001 and got stuck there along with all the others.

It is both feminist power song – about how Beverley fell in love with flying from an early age and would not allow the sexism of the commercial airline industry to hold her back – and a lament. It is about loss – a theme returned to later in Something's Missing – because the thing she loved the most has just been used as a murder weapon. Prayer, based on the Prayer of St Francis, but universalised to other religions is lovely. Welcome To The Rock is a good solid opener.

You see, I told you I can't say no to musicals, and Come from Away is no exception. It's not in the first rank, but it is good, solid small screen entertainment. And since the chances of your being able to catch an on-stage production of this any time are likely slim, this is as good a way as any to see it.

As for the shooting of the stage production. It is what it is. There are no grand cinematic flourishes – thank heaven! Since those would detract from the good honest performance on display. A few cameras. A live performance. Real audience reaction.

The worst you can say of it is that the crew filming did not allow their filming to get in the way of the essential musical and, yes, that's a compliment. 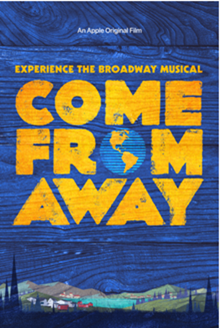 The story of 7,000 people stranded in the small town of Gander, Newfoundland after all flights into the US are grounded on September 11, 2001.