In addition to learning the three Rs at school, there's a fourth self-taught one that tends to come with the territory - rebellion. Rok Bicek's film - co-scripted with Nejc Gazvoda and Janez Lapajne - heads into the terrain to show that the drive to go against the grain can have as much to do with running with the pack as with embracing individuality.

The setting is a a Slovenian senior school where, in a break from the frequently depicted concept of bullying - seen recently and chillingly in Harmony Lessons and After Lucía - the kids mostly rub along together. Bicek, whose story is loosely based on his own childhood, sets up the dynamic economically, with Bistra Borak's costume design and Petra Hartman's make-up going a long way to telling us about the kids. There's the one with the crazy hair and glasses (Jan Zupancic), for example, who clearly fancies himself as the class joker and the one who looks just that bit smarter than the rest (Dan Mrevlje Natlacen), who turns out to be grade obsessed.

Their liberal German teacher is about to go on maternity leave, to be replaced by Robert (acclaimed theatre actor Igor Samobor), who has a far stricter approach to classroom discipline. If there is a bully in this school room, then it initially seems to be him, with his refusal to give concessions to grieving student Luka (Voranc Boh) matched by sharp-talking to the reticent Sabina (Dasa Cupevski). But his rocking of the kids' lives is merely a ripple compared to the shock that is about to hit. After tragedy strikes, emotions swirl and grief morphs into anger in search of a direction, finally settling on the thing that teenagers tend to hate most - authority.

Although the film is chiefly concerned with the pack mentality, Bicek also takes a sideswipe at Slovenian society in general. From the kids branding Robert a 'Nazi' to the one emigre student who remarks, “You Slovenians. If you’re not killing yourself, you’re killing each other” and who explains at another point why his familial responsibilities mean he doesn't have time for funerals. A meeting of the parents to discuss their kids' rebellion also neatly illustrates the way that generations influence and mirror one another.

Samobor is magnetic in the central role, bringing a stillness and thoughtfulness to his performance that contrasts with the more chaotic emotions of the teenagers. Elsewhere, however, and particularly in the staff room, the characters are more thinly drawn and the acting considerably more broad, with the inclusion of a flirty gym mistress particularly forced. Some of these scenes have an overly soapy feel that detracts from the tautness elsewhere. The film also sags somewhat in the middle. Back in the German class, however, the tension mounts as emotions translate into uncertainty that keeps Bicek's film satisfyingly unpredictable to the last. 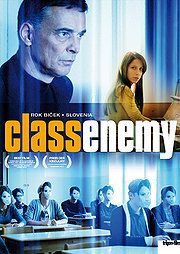 A teacher finds his class start to turn on him after tragedy strikes the school.

After Lucía
The Hunt