The content of Michel Franco's second film will send a cold trickle of fear down the spine of any parent who has ever feared a breakdown of communication with their offspring. He takes a walk on the wild side of the classroom, where a single event can have catastropic consequences for a pupil, especially if they keep it to themselves. And as with his previous film Daniel & Ana, it is the demon of communication shutdown that fuels events and leads to unbearable tension.

When we meet Alejandra (Tessa Ia), she seems to be a normal teenager who has a refreshingly ordinary and supportive relationship with her father Roberto (Henan Mendoza). The shadow of grief hangs over them, however, as Alejandra's mum was killed in an accident. Franco takes his time to show us see their bond in action, letting events unfold gradually so that they give an insight into the pair's state of mind. A fresh start in a new place certainly seems to suit Alejandra, whose good looks and pleasant nature ensure she slots right in at her new school - even a problem with a routine drug urine test just helps her make friends. Roberto, on the other hand, is struggling with the enormity of his situation, coping badly at work and wearing his grief on his sleeve to such an extent that Alejandra seems more like his parent than the other way about.

But is Alejandra coping as well as it first appears? Certainly, she is emotionally fragile, as evidenced by an ill-judged sexual encounter with a classmate. Soon her brief encounter is the pupils' hot topic and she finds herself ostracised and subject to escalating bullying - much of it sexual - from her former friends.

Franco has, like Michael Haneke, an interest in austere emotional voyeurism. There's no revelling in situations but there is also no turning away from the brutal, clinical reportage of Alejandra's predicament. Early scenes of a birthday cake with menaces and a group of girls contriving to strip Alejandra of her self-esteem and, to an extent, her identity, are bleakly believable and distressing. As Alejandra retreats with only her emotions for company, Roberto is so focused on the past he can't see the present - and the stage becomes set for tragedy. Ia is remarkably good in the central role, helped perhaps by the fact that most of the young supporting cast is played by friends of hers in real-life.

But despite Franco's gripping slow build, as the film begins to make The Lord Of The Flies look like summercamp, it starts to lose some of its cast-iron believability. While it is quite possible that the daughter of a grieving father might not confide in him, it seems highly unlikely that all the responsible adults in Alejandra's orbit would remain blissfully unaware - especially on a school trip where they are in loco parentis. Equally, while it is all too easy to accept a clique of kids could gang up on a vulnerable child to devastating effect, it seems altogether less probable that not one child in an entire class would bat an eyelid as the bullying stakes are raised.

Still, After Lucia is an uncomfortable and disturbing experience with a vengeful sting in the tail that sinks our already taut and wrung out emotions into even more chilling waters. 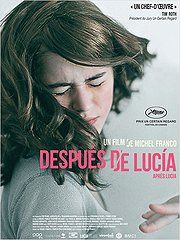 The story of a bullied teenager.