Charlie: The Life And Art Of Charles Chaplin

Biographies leave a lot out, because a full life demands volumes to do it justice. The same must be true of movies.

Director Richard Schickel is a fan of Charlie Chaplin. He's also a film critic. Therein lies a dichotomy - and it shows.

There is nothing about Chaplin's childhood, the hardship and the poverty, or how he escaped into vaudeville and, later, to America. What is fascinating is the genesis of such a varied talent. Not only did he become the most famous man in the world, but he was an actor, writer, composer, director, as well as co-founder of United Artists and no slouch on the tennis court. He used charm when he needed it and spoke, surprisingly, for a Cockney lad, with a plum in his mouth. Also, he had a passion for young girls, which today would be considered scandalous.

Schickel does not go there. He mentions that Oona was teenage when she married him and shows scenes of the ailing old man in Switzerland 30 years on. He doesn't question the darker sides to his character. Charlie's friend Mary Pickford called him, "obstinate, suspicious, egocentric," which is not included here. Schickel has only nice things to say.

There are clips from the early shorts, Charliephile talking heads and a general mood of celebration, like an anniversary Best Of compilation, cobbled together for the family.

Considering the director's background in movie criticism, an analysis of Chaplin's contribution to cinema, that questioned his self-agrandisement, might have been more valuable. The personal life is a whole other story, of course, as is the politics of his exile from the United States.

In many respects, Chaplin's story is too complex and controversial for a two hour docubiopic. By erasing the difficult stuff and concentrating on the triumphs, Schickel lets his audience down.

There really is more to The Tramp than a funny walk and smart friends. Honest, guv. 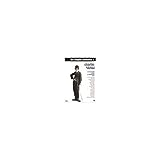 Biopic of the little tramp.