Cause Of Death: Unknown

Over a decade ago now, without the world noticing, a young Norwegian woman died suddenly. She ad been ill for may years, but her psychiatric problems were not directly life-threatening. She was the oldest of three sisters, a role model to the younger Anniken. Trying to understand what had happened, Anniken discovered that she had been on a cocktail of different medicines, each of them with potentially dangerous side effects of which the prescribing doctor seemed unaware. So she looked up some of the medicines online and learned about other deaths like her sister's - tens of thousands of them.

How could such a phenomenon go unnoticed? To be fair, it didn't, but discussion of the problem - not mentioned in this film - was confined to medical circles and rarely made headlines even in the scientific press. As Anniken's investigations make clear, many doctors didn't know about it. Journals rarely covered it, perhaps due to their reliance on the big pharmaceutical companies for advertising revenue. The public at large don't tend to seek out news about the mentally ill. Theirs are not lives to which wider society attributes much value.

But was everybody prescribed these drugs mentally ill? This question forms the other strand of the documentary, as Anniken goes behind the scenes to look at the marketing models used by pharmaceutical companies and investigate the massive rise in diagnoses of mental illness over the past few decades. The emergence of conditions like bipolar disorder is questioned as she parallels it with the development of a new drug which couldn't be sold to treat established illnesses. Given her sister's experience, Anniken is not denying that mental illness can be real, and extremely debilitating, but she's wary of the application of new labels to sets if symptoms that would have been interpreted differently in the past, and is particularly concerned about the pathologisation of people whose problems are minor and could better be explained by circumstance than by psychology.

Untangling these issues in a sensitive manner is a difficult task. Anniken treads a fine line but will succeed in keeping most viewers on side. She builds her case effectively, challenging key myths. No, there is no actual evidence linking low serotonin levels to depression. Yes, corruption can be as serious a problem in European countries as in the US. The film is refreshingly free of the hysteria of the usual anti-Big Pharma crowd; Anniken makes some of the same arguments much more coherently, but never loses sight of the fact that sometimes medication does help and some people depend on that.

Combining interviews and dense passages of information with personal mementos that remind us that this issue is about human beings, Cause Of Death: Unknown is an impressive piece of work. The pacing isn't perfect and the depth of attention on different issues is uneven, but this is only to be expected from a first feature-length work. Quiet and focused where US documentaries on similar themes tend to be aggressive, it brings a distinctly Scandinavian sensibility to its subject, and is stronger for it. Perhaps the strongest statement is made by Anniken's images of the possessions her sister left behind. Clothes folded neatly, boots still scuffed with mud; personal care products only half used; the paraphernalia of a life only half lived. This alone is reason enough to pay attention. 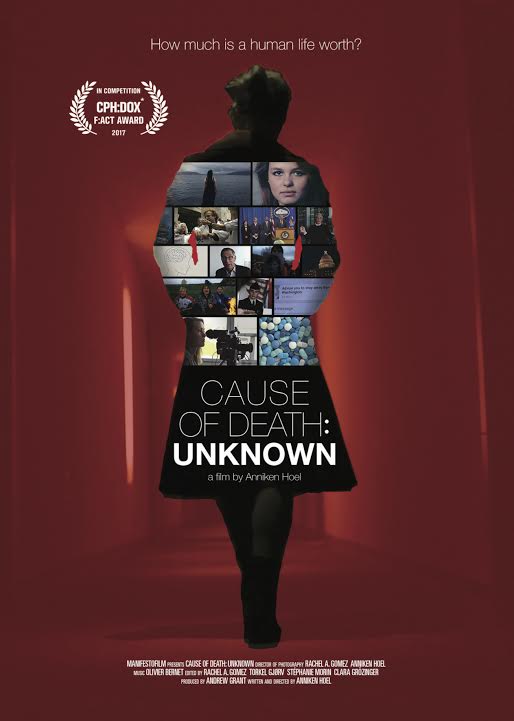 A filmmaker investigates her sister's death from prescribed medication and asks if the pharmaceutical industry is culpable in relation to thousands of other such cases.
Visit The Official Site
Trailer