The remarkable thing about Australian director Phillip Noyce's engaging political thriller, which is set in the South Africa's apartheid era, is that he has succeeded in making a thoughtful film in a genre strewn with pitfalls.

Derek Luke plays Patrick Chamusso, a (real life) black African who becomes radicalised as a result of his wrongful detention and torture by South Africa's ruling white party. Conscious of his duty to support a family, Patrick keeps his head down, having nothing to do with terrorists and 'trouble-makers' who want to attack the massive oil-refinery where he works as a foreman. Patrick doesn't even let his aging inlaw listen to the 'Radio Freedom' channel. But after a false arrest and incarceration - during which time he is not charged and so has no right to a lawyer - Patrick is beaten senseless and then sees the same treatment meted out to his wife. The experience converts him to the cause and as soon as he gets out he's off to Mozambique to train as an ANC freedom fighter.

Patrick's opponent is Tim Robbins, who plays Nic Vos, the Colonel in an anti-terrorist squad. In a poignant montage, we see Vos receiving a medal, intercut with another shot showing the burial of murdered ANC fighters (who receive a gun-salute).

The average movie would already have made simplistic references to Guantanamo (or any other political hot topic), reduced Chamusso and Vos to mere ciphers, moralised to the point of being patronising, or wallowed in sentimentality. But Noyce is no average director. He has produced sterling thrillers such as The Bone Collector but, more importantly, has shown himself to have a firm grasp of human rights, seen in both his treatment of The Quiet American and Rabbit-Proof Fence. This film is about the making of a terrorist, but within a specific historical context, and makes no judgement beyond South Africa.

The hybridisation of South African society is competently developed. Our story is told primarily from the viewpoint of blacks. This is in contrast to the usual Hollywood formula which would show whites mistreating them, and then whites eventually (and heroically) developing more enlightened views. We get to know Patrick, his family, his shortcomings, his daily life and his love of football. Yet focusing too narrowly on him could have turned Catch A Fire into mere polemic. Instead, Robbins is also allowed to develop the character of Vos, who we see as a man doing what he believes is best rather than someone who is an out-and-out monster. The Colonel also has a family he loves, and teaches his daughters that his job is to make the country a safe place for them to live in. He can calmly oversee torture one minute and play good cop the next -yet conveying sincerity with both attitudes.

South Africa today is neither the country that it was under apartheid, nor the country that it was before outside nations established control. Crucial insights paved the way for South Africa's 'freedom' - rather than a victory of one race over another. Concepts like universal sharing and passive resistance. This is epitomised in the film when a saying of Nelson Mandela is recalled - 'we can never be free until we learn to forgive'.

The real life Patrick (who makes a brief appearance in the film) now lives with Conney, a woman he married after his release. They have children of their own and have fostered over 70 AIDS orphans at their Two Sisters charity (www.twosisters.org.za - which appears in the end-credits). The addition of documentary details may annoy some audiences who wanted to leave the cinema purely after a thriller, but for this viewer the cut to real-life seemed an excellent anchor without giving way to sermonising.

Catch A Fire is a complex political thriller based on at least one historical character. It documents an important chapter of history. The degree to which there are parallels or lessons for other situations in the present day is left entirely for the viewer. What is clear is that Noyce has once again handled a multifaceted and challenging story with skill and even-handedness. 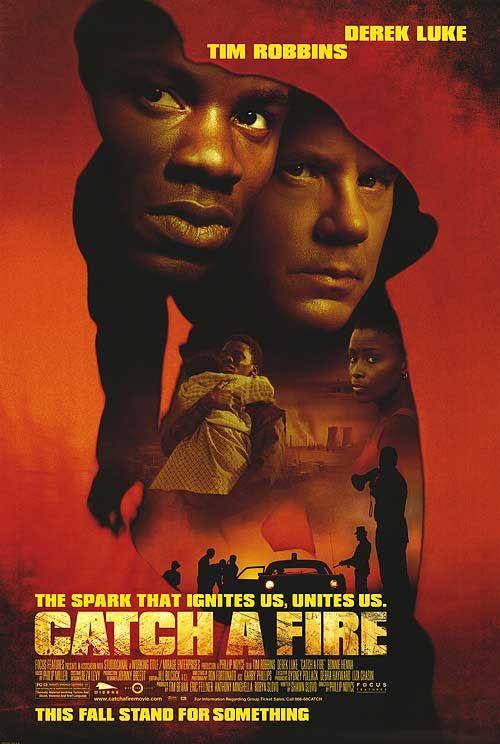 A black South African is radicalised after being wrongfully arrested under the Apartheid regime.