Bullhead starts off as a standard crime thriller told mostly from the point of view of Jacky Vanmarsenille (Matthias Schoenaerts), one of the criminals. He is a farmer and small time thug in the cattle doping business. Jacky is constantly doped up on steroids, hormones and other body building drugs. He is constantly on the edge of exploding in sheer animal rage. Some of his associates have set up a deal to supply growth hormones to a group of gangsters from across the Dutch Belgian border. The gangsters, however, have recently murdered a meat inspector, which has attracted a lot of attention from the police.

Up to this point Bullhead is brooding and sometimes darkly humorous, well shot and acted but ultimately nothing special. It is standard fare with its police informant Diederik Maes (Jeroen Perceval) subplot and Jacky's somewhat cliched steroid rage.

The film changes. A momentous episode from Jacky's boyhood is slowly unveiled in flashbacks. As a result the relationships between Jacky and others in the criminal underworld become evident. More importantly the incident repaints the character of Jacky from a violent thug to someone who is tragically isolated. He can only achieve a portion of his vision of masculinity and he can only do this through the use of drugs and violence. He finds it difficult to operate outside the world of his farm and livestock. Crime and farming both leave him apart from society. In some ways this seems to suit Jacky. His choice of lifestyle prevents him having to come to terms with himself and what has happened to him. When he is confronted by thing that he can't cope with like women or talk of sex, you no longer see rage but emotional distress.

As a study of damaged masculinity and sexuality, Bullhead has a lot more depth than the crime thriller it started off as. Its ability to pivot from the well put together but somewhat derivative gritty thriller to character study is what makes the film interesting to watch and properly gripping. Stepping away from the norms of the crime genre gives it the unpredictability it needs to maintain tension.

One of the things that stand out about the film is the high level of acting. Schoenaerts and Perceval both acquit themselves well, and mentions should go out for the all the child actors, particularly Baudoin Wolwertz and Robin Valvekens. 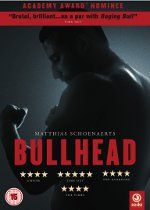 A young cattle farmer is drawn into a dangerous deal.