The horticulturalist is busy tending his plants when it happens. A piece of rock as big as his spacecraft smashes into it and sends in spinning into a small moon, irreparably damaged. Stranded, unable to summon help, he despairs. The little plant he has transferred to the moon’s surface withers and dies. But then another spacecraft crashes on the moon, bringing with it a pink-haired, pink clad alien astronaut whose magical touch brings the plant back to life, and together they begin transforming the lifeless moon into a garden.

A very personal story of romance, family and – eventually – loss, Joe Mateo’s animated short is not shy about sentiment as it addresses issues around loneliness, grief and the discovery of unexpected joys. It’s strictly within the realms of fantasy, so you’ll have to set aside any concerns about how a moon that size could hold an atmosphere or why an advanced one-man spaceship would lack an automated scanning system. The focus, instead, on bright colours and sparkles makes it easily accessible to young viewers, and it’s potentially a good tool for parents to use when talking to their children about bereavement.

The animation here is fluid and charming. All of the characters are child-like, the horticulturalist’s adult status signalled only by a hint or stubble over his top lip. Mateo’s use of rounded shapes complements the focus on nature and helps us to understand the joy that the garden brings. Whilst a diet which seems to consist solely of mangoes might be expected to lose its appeal over time, they always look plump and delicious. No words are used but the characters communicate with ease, and there’s plenty of laughter.

Ultimately your feelings about Blush will probably depend on how much sugar you like in your films. Some viewers will find it adorable; others will want to scourge the stickiness from their minds. Given the situation that inspired it, it probably represents an understatement of Mateo’s feelings, but it’s still a lot to throw at an audience. There’s little depth to the story and if you can’t immediately relate to it, it won’t draw you in; but there’s no doubt that it will speak to many viewers and, despite its sorrowful aspects, leave them smiling 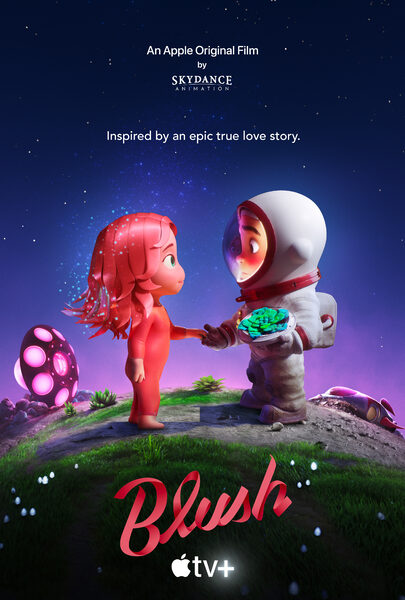 The animated tale of a stranded horticulturist-astronaut who meets an ethereal visitor on a desolate world.