What began as a Sixties TV series, could so easily have been a Disney cartoon. The ingredients are all here. Instead, director Nicolas Vanier has performed a small miracle. This tale of a boy and a dog in the Alps during the German occupation is fabulous to look at, enriched by memorable performances from Felix Bossuet as the boy and Tcheky Karyo as his grand-dad. The film succeeds in transposing its overt sentimentality into an exciting narrative.

Sebastian's mother is supposed to be in America which he believes is over the mountains. His grand-dad, a peasant hill farmer, takes him everywhere and teaches him the ways of the wild. His present worry is what he calls "the beast," a feral dog that is killing his sheep.

Sebastian makes friends with "the beast" which turns out to be big, white and fluffy. Later it is revealed that the real culprits are wolves - in the Alps?

As well as the boy's affection for Belle, the dog, and his attempts to save her from the hunters' guns, there is the constant fear of the Nazis who are aware that these mountain passes are being used as routes for Jews escaping into Switzerland.

The only weakness, which nagging grown ups will be quick to point out, is that Belle could never have been mistaken for a rabid beast. She is too sweet, too affectionate, too tame and too good in an avalanche.

No matter. Everyone should have a Belle. 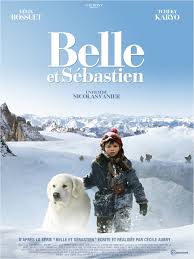 The adventures of a boy, his grand-dad and a runaway dog in the French Alps during the German occupation