Somewhere in a quiet room in an anonymous town, a bear is at work. He's getting on a bit, his fur greying, glasses propped on his nose. Around his house are pictures of his family, but he seems to be alone. In his paws, however, he holds carefully constructed clockwork bears, a mother and a child.

This gentle but powerful Chilean animation is accompanied by music. Its hero never speaks or makes a sound, but tells his story through his inventions, through the clockwork machine he takes down onto the streets to show to children. A young cub gazes wide-eyed as he watches what is probably the old bear's life story. Perhaps he is learning something about his own history for the first time.

Happy endings may be rare in Chile's troubled history but where there is little joy there can at least be beauty. The bear's story is beautifully told, with animation, narrative and music coming together in tribute to the spirit that has enabled those who suffered to endure. Once there was a happy bear, living in an apartment block. Then the circus masters came in their bizarre fascist uniforms, enslaving all the animals in scenes whose smattering of humour only adds to the horror. Even if there is a way to resist, to escape, can things ever be the same again?

The use of animals in circuses is currently a big debate in Chile, so this film is tackling multiple social issues. It also illustrates the potential of the circus debate to open up conversations which have been repressed or marginalised for a long time as the country has tried to come to terms with what happened under Pinochet. The use of bears is not only a charming way to tell the tale (which is suitable for children as long as parents are prepared to talk about it afterwards), it's a reference to the coding of such conversations used in many societies to work around bans and social pressure.

A poignant and affecting fable, Bear Story encapsulates the sorrows of a generation and reminds us that there's still room for love. 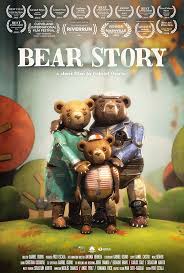 A lonely old bear tells his life story through the mechanical puppet show he has created.