There's some comic mileage in the fact that the Long Halloween is sufficiently so to require two parts. Covering more than a year in total, it struggles with pacing despite the opportunity to plan. The original story is sprawling, bringing in not only large parts of Batman's Rogues' Gallery but, eventually, adding to it.

Perhaps more than the first part, this requires familiarity with the variety of vaudevillian villains that gather in Gotham. Poison Ivy carries us a good way through the action, and Scarecrow (and his alter ego) are quite important. We don't get to quite the same depths of reference as, say, The Suicide Squad, though David Dastalmachian does appear as both Calendar Man and the Penguin. The former does actually appear more, perhaps unsurprisingly.

The city, and the Falcone crime family, are being targeted by a killer known as Holiday. There are references to other such stories, a box of cannoli, a Godfather visited at their villa, even a criticism of their plural, shades of another Italianate power struggle too with a Romeo and Juliet of sorts. Struggling with it all that core triumvirate of Batman (Jensen Ackles), Commissioner Gordon (Billy Burke), and District Attorney Harvey Dent (Josh Duhamel).

There's a lot of people to keep track of, but casual familiarity should be sufficient to paper over the cracks of continuity. A scene after the credits of Part Two doesn't require that you know every member of the Justice League but it would help if you know who's only managed TV shows and not movies. More complicated is the familial relationships - there are sons, daughters, annulled marriages, sons treated by fathers, family heads, family tales.

As Dent gets ever more desperate in his pursuit of Holiday and the Falcones, as the Maroni clan continue in their conflict with both, Mrs Dent, Gilda (Julie Nathanson) cuts an ever more lonely figure. She's not the only one left to stand out.

Stately Wayne Manor has rarely looked so incoherently massed. I don't know that anyone would be able to label the gables even before they're overrun with ivy. It does seem a little odd as many characters make their first criminal appearances that Arkham is so large, it looms from the landscape like Jabba's palace shot from an angle that does not force perspective. One also wonders about the wisdom of keeping horses in an asylum, but given the quantity of cartoon crazy that might represent the only stable thing there.

There's a lot to get through and at times this feels rushed. Holiday's identity is perhaps overly telegraphed, though even as it's repeatedly revealed some justifications feel missing. Motivation and opportunity are one thing, but there's little light shed on how ends become means. Endings also leave questions as to what Batman will tolerate, what secrets are kept and what moments are unexplored do too. Julie Nathanson's Catwoman has a lot to do here. There's a continuing habit in Bat-stories to have alternates and parallels and reflections and repetition. Here Catwoman is in opposition to most of Gotham's crime and crime families, but her motivations and the nature of her allegiance to Batman's goals are complex.

I don't know if it was the klaxon or the mixing but I needed subtitles to make clear the line "Heads! I meant heads!". In the DVD extras there's both parts of Two-Face from the 90s animated series, and it does more with and around coins than this does. At least, not alone. A scene in a library doesn't require further reading, but remembering. The chain of custody of evidence is one thing, but for character- and plot-defining artefacts it's even more important. There are distinctions between this and other continuities. A presence (and an absence) in a climactic courtroom, and so on. Given the angst over Vicki Vale not being told something in 1989's Batman it's interesting to see whose weans are among those kent. Secrets abound, but sometimes we're not told things because we're not going to be.

The use of Solomon Grundy as a big hitter was a novelty, and it's good to know that the alliterative Arkham Asylum has a Taco Tuesday. The animation is still crisp, but the cars move oddly and there's a moment where it seems someone's copy and pasted the coverings on Calendar Man's wall. They do say it's a leap year as well, so it's not February and March...

I had looked forward to part two as soon as the credits of part one had appeared, and here we are. If you enjoyed the first the second is as strong, and for all the occasional oddities it follows its course cleanly. Not always confidently, however, resolution feels rushed. Others have talked about how this is less an origin story for characters than for the city. A continuation of sorts for Batman: Year One this is second year in an evolution. Gotham is a product of years of distortion, hundreds of creators, more than eighty years of stories now.

Later this year, we'll get another live-action Batman, in another live-action Bat-continuity. The Long Halloween is itself a revisitation of a revisitation, this part two is not a sequel but part of the same story. That makes the pacing harder to justify. Elements established in Part 1 are not clearly repeated in Part 2, but I may be doing a disservice by not watching these back to back. That for many doing so would involve changing a disk is perhaps neither here nor there. In distilling a 13-part series of comics to a two part series of films there's always going to be something lost. This is entertaining, though perhaps requires more in terms of fan knowledge than the first, and indeed, than the first provides. I enjoyed it enough though to hope that DC will continue the story (as they already have) with Dark Victory. Though I might need the help of Calendar Man to determine how long I must hang around for that. 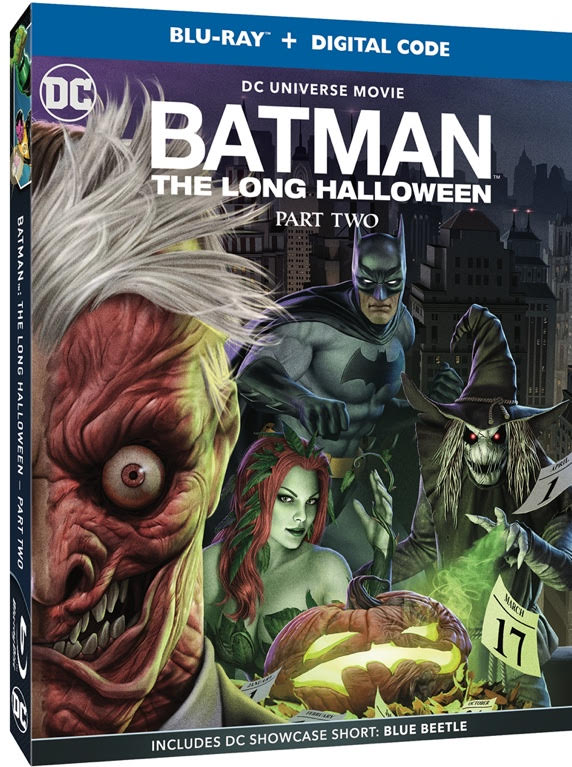 Second part of the animated adventure sees Batman search for a serial killer.