What is the point to Bad Detectives (previously “Year of the Detectives”)?

It is billed as the story of two young women, Nic O'Connell (Freya Tingley) and Ping Liu (Dralla Aierken), who must team up to “try and solve the mystery of their detective grandfathers' murders”. I had hopes, briefly, of some comedy. After all, the one thing that we know from the very beginning is that after some unspecified childhood falling out, Nic and Liu are the worst of enemies, ready to shout loudly and unreasonably at each other at the drop of a hat. Or funerary urn.

At any rate, they don’t seem to have a clue about actual detecting. Could this be an update of the Thomson and Thompson pairing (pace Tintin from years gone by)?

Short answer: no. The two are thrown together after their respective grandfathers, who ran a detective agency together, appear to have fallen off a rooftop in downtown LA. In the fog. Because that’s what happens when the smog rolls in. There is no real backstory, apart from some portentous camerawork suggesting Nic might have a hidden past as an army sniper.

Otherwise, they squabble for a bit. Then they do a bit of bonding. Then, improbably, they solve the case. Well: they find the thing that their granddaddies hid and, presumably, died for. But even after the best part of 70 minutes of this insubstantial saga, I am not much wiser.

Whose thing was it they were hiding? Why? Who did kill the old guys? Do I care? To which my answers are approximately: dunno, huh?, no idea and no.

Not that there is any shortage of suspects, since pretty much everyone that our would-be detectives come into contact with turns out to be the opposite of what they are billed. Grandpas’ friendly lawyer and estate executor (Jim Meskinem)? Crooked as the day is long. Friendly Assemblyman Wei (Victor J Ho). Not so friendly when push comes to shove. Or when our youthful sleuths sneak off to do some detecting around their bedroom.

As for the Police detective double act that goes by the unlikely names of Wong (Ping Wu) and Weasel… Sorry: Weezul (Paul Rae)! Something tells me they were cast and scripted courtesy of Cliché Central Station.

In vain, I waited for the plot to pick up and the script to gain pace. Or wit. Maybe one of the women would turn out to be a covert ninja. Something. Anything! Anything to break the monotony of an hour in which next to nothing happens – apart from one bad guy being beaten noisily to death just off-screen. After a while you realise the nothingness is not some artistic trope, or clever directing gone to waste, but just an absence of anything interesting happening.

OK. Director Presley Paras does their best to make up for this whole plot hole by resorting to some pretty heavy directorial strokes. Did I mention the portentous opening, which comes gift-wrapped with loud pacy music, presumably to encourage viewers to think something interesting is happening when it is not? I think I did.

At any rate, the pounding music sidles in whenever not much is happening. So, as you might guess, there is a fair bit of loud music throughout Bad Detectives. The acting …sucks. The plot, as above, is more absence than anything else. And sadly, the dialogue is not anything to write home about. Apologies to Chris Johnson, who is credited with writing this less than stellar work.

Occasionally, there are flashes of writerly craft to be heard: “I’m the one with the badge. I’m the one that does the talking”, says one of the cops, early on.

Or, “What is justice without vengeance?”, intones the mysterious Shadow Emperor. Aha! Could this be wry sense of humour finally coming into play? Probably not.

The whole has to it the feel of a pilot for a very specific concept: a detective series along the lines of Randall And Hopkirk (Deceased). Except in this case, everything except the detectives has already died on set and gone to meet its cinematic maker. 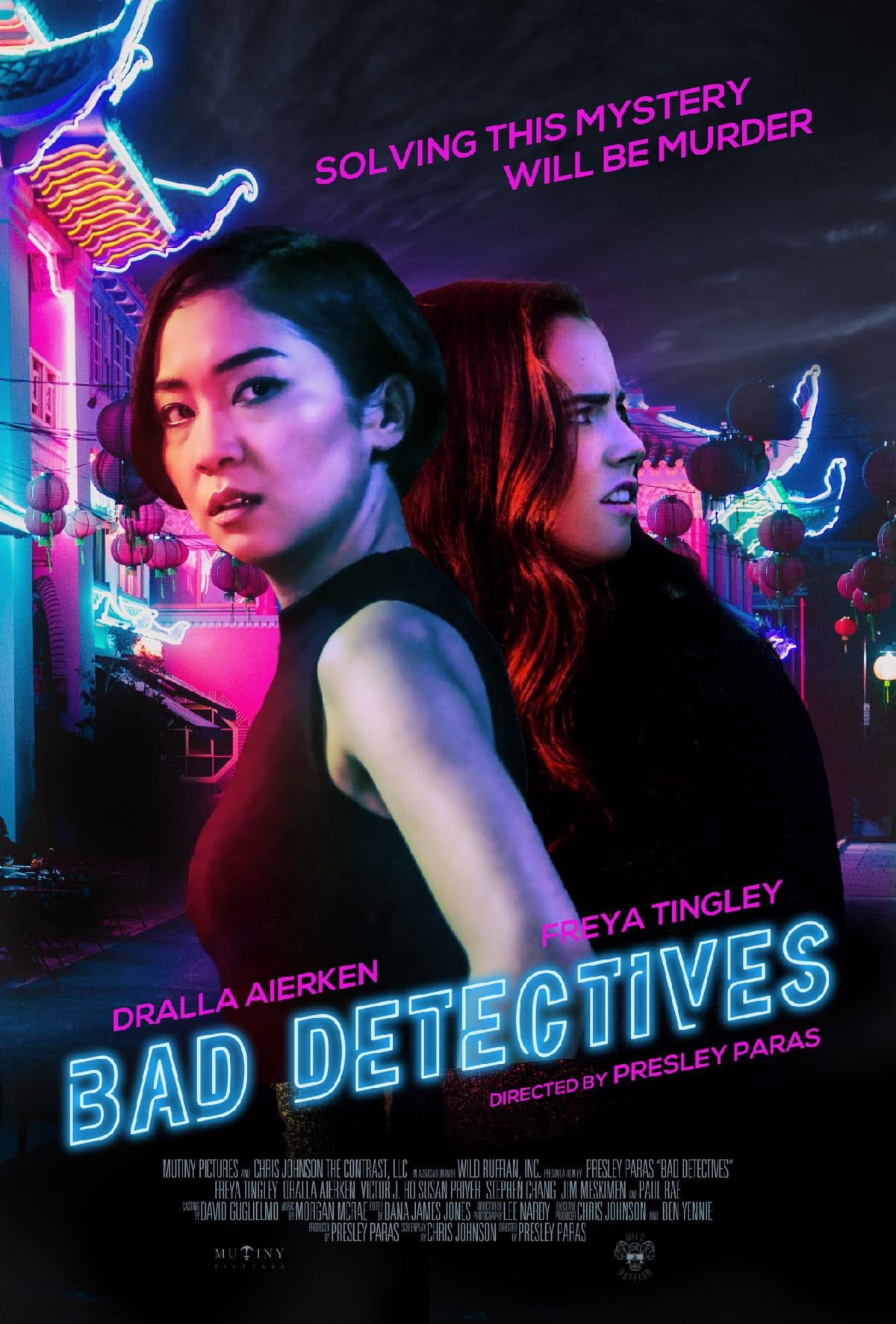 Two young women try to solve the murder of their detective grandfathers.