It could be any time in the later 20th or 21st centuries. High in the Tyrol, villages are slow to change. The girl and the boy live outside the village, on a farm which they manage to keep going after their father is shot and the mother gradually wastes away from some unknown complaint. The boy is ten then, and mute from shock, but still the children seem to live a happy, carefree life, running and playing in the hills. The girl is 16, however, and beautiful, which means that up there in that once undisturbed place there is suddenly something that the men of the village want.

For a story that hinges on rape and brutalisation, Autumn Blood is impressively restrained. The violence is more affecting because we see only a little of it; the focus is all on the children's response and, more subtly, on the way that it impacts the various men involved. Removed from civilisation, rape is shorn of its cultural trappings, degendered. The children's fear afterwards extends to any adult. The girl experiences no weight of shame, but responds like a hunted animal, a long-legged deer bounding across the landscape as the hunter raises his sights. The boy, smaller, less adept, follows her lead and her instructions, tries to hide. Because when the men realise their actions could have consequences, they decide to get rid of the witnesses.

A third of this film has gone by before a word is spoken, and then it's a quote. This is a wild place where communication is all about glances, body language, animal sounds. Director Blunder captures every detail. Sophie Lowe, who made her debut in the underrated Beautiful Kate, and young TV star Maximilian Harnisch, as the girl and the boy, are both exceptional. Fine supporting work gradually distinguishes the men, showing us hesitation, guilt, fear, and cultivated ruthlessness. One of them orders the boy removed from the room whilst the girl is assaulted, suggesting an empathy that does not extend to someone female.

The whole is illuminated by Reed Morano's stunning cinematography, which contextualises the action in the world as the children understand it. When the girl is naked, she is never sexual, for all that the men perceive her that way; she simply seems a natural part of the landscape. At the heart of the film is her journey; she is not a tragic figure waiting to be avenged, nor a crudely drawn action heroine bent on revenge. She is simply determined to survive, and to protect her brother, and through her fortitude the film taken on something of the character of a western. Accepting the challenge of sudden adulthood, she is carving out the right to stand her ground in this unforgiving land.

Doubtless the film will be too slow for some, though it paces its action scenes well, but its only real flaw is the music. Whilst this could work well enough in a lesser film, here it lacks the subtlety and variance to properly capture the mood. On balance, this is a small thing. Autumn Blood is a superb piece of work and deserving of widespread attention. 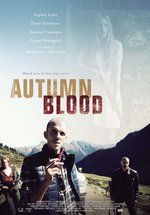 Two orphans living high in the mountains are threatened by a gang of local men and must face a brutal struggle to survive.