Attack Of The Adult Babies

The history of satirists representing powerful men as babies goes back at least to the mid-18th Century. It's difficult to know when adults first started dressing and behaving as babies recreationally - though the phenomenon was first recorded in the 1990s it is probably much older. It might be thought of as a gift to the satirist, but that old line about art flourishing within constraints has a flip side - sometimes a connection is just so blatant that it's difficult to know what to do with it. Attack Of The Adult Babies was a tale always waiting to be told - it just had to wait for somebody to come along who was neither intimidated by crudity nor limited by taste.

The film begins with an unhappy family. When Dad is taken hostage during a home invasion, Mum and the two teenage kids are forced to drive to a nearby stately home from which they must retrieve secret documents if they want him to live. On arrival, they find that the house is being used to run a special event, with young women in skimpy nurses' outfits attending to the needs of some of the most powerful men in the country, who are crawling around in nappies. But all this is just scratching the surface. What's really going on involves dark family secrets, a decades old conspiracy and what just might be the prelude to an alien invasion.

Made on a very low budget with cheesily amateurish cinematography and acting as porcine as some of the characters, this is comedy in the vein of Peter Jackson's Bad Taste, as intent on grossing out its viewers as it is on entertaining them. Wearing its Britishness on its sleeve, it achieves this with abundant scatalogical humour, crude commentary on class and a lot of lurid sexual teasing but, naturally, nothing too sexually explicit. In due course, heavy helpings of gore are also served. Russian gangsters and impatient dominatrices are added to the mix, and there's also a lengthy psychedelic sequence in the course of an ending which manages to make a strange kind of sense of what has gone before.

There's a joyousness about this kind of filmmaking, unrestricted as it is by any concern for convention, and it's certainly an imaginative piece of work. Its clumsiness will put off a lot of viewers but if you're willing to bear with it, it's independent in a way few films labelled as such really are these days. Though it would be quite a stretch to call it good, it's destined to attract a cult following. 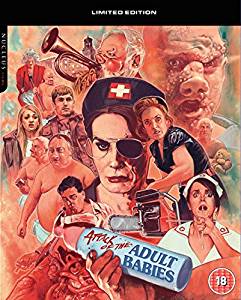 A home invasion forces two teenagers to break into a remote country manor little realising it is a retreat for middle-aged men who like to dress in nappies... and who have a sinister plot.