At The End Of The Day

'Love the sinner, hate the sin' - that's the standard line trotted out by conservative US Christians trying to reconcile their condemnation of homosexuality with the injunction that they should love their neighbours, and it duly makes an appearance in this film, though not until halfway through. It's a propaganda tool whose very crudity is at odds with Kevin O'Brien's sensitive film, despite the fact that this could easily have been a work of propaganda in itself. Although the script contains formulaic elements, it is to O'Brien's great credit that it finds its own direction and stands up as a piece of art with something to offer regardless of the ideological position of the viewer.

Stephen Shane Martin plays Dave, a teacher at a Christian college whose resentment of gay people becomes personal when his wife leaves him for a woman. All the same, he's aware that he doesn't really know any, and this inspires a degree of curiosity which blends with his ideological motives in inspiring him to infiltrate a local LGBT support group. There, he's surprised by how nice everybody seems, and his convictions begin to falter. As his boss pressures him to stick to his guns, he finds himself falling for a straight woman (Danielle Sagona) who works with the group, but it's his encounters with a troubled teenager from his class that really cause him disquiet - and his awareness that, sooner or later, the truth will out.

Martin delivers a finely tuned performance that retains audience sympathy without sliding into apologism. It's clear from the start that Dave is aware of the hypocrisy inherent in his actions, but his genuine openness to loving the sinner, as it were, invites viewers to cut him some slack.There's an emotional honesty about him that sits at odds with his verbal obfuscation and misleading behaviour. Yet throughout the film he struggles to take responsibility for his actions, and it's on this that the core of the narrative rests - though he's in this thirties it might easily be understood as a coming of age story, with philosophical and romantic narratives subsidiary to that.

Dave's journey is further complicated by the fact that he's living with his elderly aunt, a flamboyant woman who makes no secret of her active sex life yet humours him with such gentleness that he struggles to work out what she actually believes. Her presence complicates myths about American tradition and reminds us that this is a country which has always been structured around a diversity of cultural narratives. She's also one of several characters who complicate the notion that its current 'Culture War' has two neatly divided sides with everybody on one or the other.

Everything here is beautifully photographed and great costume design helps the cast bring depth and complexity to their characters. A visit to a shelter for young people rejected by their families provides a glimpse of just how many different kinds of people struggle to find a place within a rigidly heterosexual, binary gendered society, and there's even an intersex character, rare as hen's teeth. Yet although the film is passionate about showing us what people like this go through, it doesn't feel preachy - its power comes from what it shows rather than what it tells. Dave's internal struggle (which also neatly upends the myth that homophobia is all about internalised repression of sexuality) parallels wider currents of social change. There is no suggestion that atonement is easy or forgiveness always deserved - simply that they are worthwhile for their own sake. 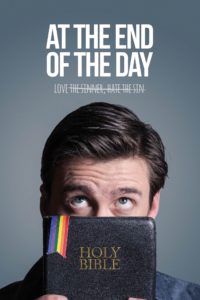 A conservative Christian professor who experiences a profound change when he goes undercover and infiltrates a gay support group to stop their plans to open an LGBTQ youth shelter in their small town.