Arabian Nights: Volume 1 - The Restless One

This is not an adaptation of the book 1,001 Night, we are advised at the start of part of one of Miguel Gomes' sprawling epic (just in case we confused troubled Portuguese shipyards with ancient Baghdad). It does, however, take that form. As Scheherezade once told stories to stay alive, Gomes and co-writer Telmo Churro present us with a series of fables aimed at providing insight into (and opinion on) Portugal's part in the recent global economic crash, which reached its shores in 2010. Maidens from Baghdad, perhaps refugees but wearing ancient garb, shelter on an island and tell tales - perhaps, as outsiders, they see events more clearly. They certainly provide perspective. We are looking at events as if they were long, long ago and far, far away, and the magical realist stories that unfold make no attempt to hide their allegorical nature.

Once upon a time (o my king), there was a group of men whose masculinity seemed threatened by the fact they couldn't get erections. They sought out a hermit who gave them a magical cure - but as with most such gifts, it had another aspect which they had failed to consider. Priapic and equally frustrated, they became slaves to their desires, lost control of the matters of business and state for which they were responsible. Events spiralled out of control. It's a seminal tale which seeds the stories that will follow. Gomes' pace is gentle, his setting pastoral. We are invited to imagine these abstracted events, this process of decision making and failure to make decisions, as if it had no bearing on our own lives.

The narrative that follows deals more directly with austerity but are primarily concerned with building up the sense of a gathering storm, promising darker days in the later parts of the trilogy. A cockerel (of course) struts its stuff in a take of prophecy and denial. A girl, jilted in love, commits spectacular acts of arson to get the attention of the boy she's still obsessed with, making myth out of the real wild fires that troubled the country in those years. Scorched earth is its own metaphor. Gomes is not subtle but, given his chosen language, doesn't really need to be. A bigger deal is whether or not he is entertaining. In this regard, the tales are inconsistent, though it's worth bearing with them as some only reveal their true power towards the end and there is extensive cross-referencing. At their best they are elegiac, replete with that particularly Portuguese form of melancholy, saudade. At their worst they are ponderous and crudely manipulative, but fortunately there's a lot less of that stuff.

Together with Johnnie To's musical Office and Adam McKay's comedy The Big Short, the Arabian nights trilogy completes a triptych of curiously slanted pictures about the global economic crash. It won't be to everyone's tastes, but it's undeniably important, and problems on this scale are always better understood when considered from multiple perspectives. 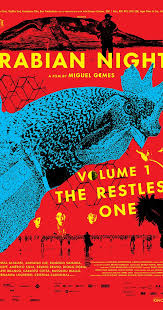 A maiden from Baghdad tells a series of stories explicating Portugal's financial crisis.