The Danes in Afghanistan are doing what the Brits and the Yanks were up to in those TV docs of life on the front line (wherever that might be) - going out on patrol. This requires a handful of heavily armed soldiers walking in single file extremely slowly across open country. Occasionally one of them steps on a mine. Usually not. And (phew!) another day passes.

The best thing about A War is its uncompromising attitude towards the futility - some might say absurdity - of their mission. The men are restless. Their commander, Claus Pedersen (Pilou Asbaek), makes decisions that inevitably lead to civilian deaths.

It is one of these unfortunate episodes that concerns writer/director Tobias Lindholm.

Pedersen cocks it up. Women and children are killed by mistake. The heat-of-a-battle excuse doesn't wash back home where accountability is everything. Red tape and red blood don't mix.

The film has a downbeat vibe. Pedersen's character is serious, thoughtful. The war is out there. Somewhere. Innocents become victims and the enemy is heard but not seen.

Intercut with moments of comeradie and confusion "in theatre" is Maria (Tuva Novotny), Claus's wife, playing a waiting game with the kids. She's pretty, intelligent and worried sick. She wants him back; she wants him as he was.

Pedersen doesn't die, but returns under a cloud to face the Scandinavian version of a court martial, which takes up the final third of the movie and is conventional enough, although more casually dressed.

Pedersen's stiff upper lip looks oddly British and, despite a charm bypass, you do care about his case.

The message comes in triplicate. Why war? Who's to blame? What's the law got to do with it? Morality and mayhem make uncomfortable bedfellows. 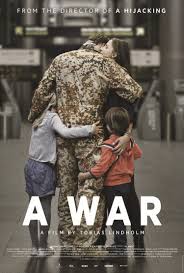