What does it take to tell an epic story about the end of life as we know it? 51 Degrees North doesn't have the budget of films like Deep Impact and 2012, but with a principal cast of just three, tiny sets and barely any special effects, it delivers something much more powerful.

Moritz von Zeddelmann is Damon, a happy go lucky young filmmaker whose short films about London life have made him an internet sensation. After he stumbles into making educational films about Near Earth Objects - asteroids and comets that pass close to our planet and could present a risk to it - his fans start to drift away, but Damon is intrigued by the subject and the new responsibility it represents. Changes in his personal life also demand commitment, however, and meeting this becomes a challenge - but that's nothing to the burden he must take on when one of his astronomer contacts lets him in on a secret.

By focusing on one man's story, 51 Degrees North gives its overwhelming central event personal relevance and weight. Even where it resorts to cliché (such as in the choice of song near the end), it retains its solidity because, well, people do do predictable things in stressful situations. Von Zeddelmann invests Damon with an everyman quality that keeps us rooting for him early on, but it is the depth of loneliness he conveys in the latter third of the film that really makes an impact. Though life continues as usual around him, the public none the wiser, there is something of the haunting quality of Neville Shute's On The Beach about the hollowness of his routine. His camera, he tells us at the start of the film, is what he loves most in the world, and it is his duty as a filmmaker that seems to consume him as time dwindles away.

There are wider themes underlying this. Like many documentary makers, Damon is consumed by his subject, gradually losing connection with any other reality. His business partner assumes he's having some kind of breakdown, and only the context provided by a voiceover keeps us from wholly buying into this interpretation of his behaviour. He is also a young man as surely overwhelmed by fatherhood as by larger events; everything about his life would be changing anyway, and he might feel just as lost.

Richters' film is cleverly constructed, a found footage piece assembled for material supposed captured by a variety of cameras but centering on Damon's own pre-edited material. Bits of this verge on the twee, but this is probably necessary to capture the Zeitgeist and present him as a project of his age, as part of a generation that prioritises recording over experiencing, apt in the circumstances. We get a strong sense of character from the shape of the film itself. Meanwhile, clips of real life news footage are cleverly inserted to contribute to and contextualise the story. Richters captures the style in his fictive reports and interviews so perfectly that they blend seamlessly into this, making it hard to determine just where the boundaries of reality lie. With a deliberately disorientating guitar soundtrack composed by Brian May, it's a film that continually eludes the viewer's grasp.

For a first feature, this is a stunning piece of work. It may sometimes struggle with pacing but it sets itself a lot of challenges and succeeds admirably at most. Without the marketing budget of its blockbuster rivals it may struggle to get the attention it deserves, but if you're a fan of the genre, you'd be a fool to miss it. 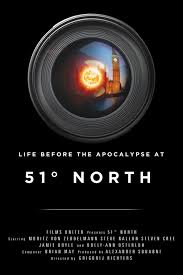 A young filmmaker making educational material about Near Earth Objects is made party to a terrible secret.

Beyond
The Wild Blue Yonder