What? What was that?

At the outset I had little idea what to expect from 2036 Origin Unknown. By the end, I was not, as many viewers appear to have been, disappointed. For I like sci-fi, even obscure. But I was – and remain – puzzled as to what I had just watched: what had happened; and, crucial to a film following a path oft taken, exploring the first encounter of mankind and alien civilisation, not much clearer about what, if any, was the film's central message.

According to the official blurb: “After a failed mission to Mars, A.I./ARTI is now used for the 2036 mission with a few human supervisors. A monolith of unknown origin is found there. It will have a big effect on Earth”. And that is pretty much that.

Most of the action and around 90 per cent of on-screen time is taken up with Mackenzie 'Mack' Wilson (Katee Sackhoff). For some of that, she is interacting with her sister Lena (Julie Cox) and investigator Sterling (Ray Fearon). Mostly, though, the focus is on the relationship between Mack and AI programme ARTI (voiced by Steven Cree). This follows two quite separate arcs: on the one hand, a real and consequential interaction as Mack and ARTI lock horns on how best to deal with the Martian artefact; but this spills out into a lengthy examination of what it means to be human – and whether it is inevitable that humanity will be overtaken, supplanted by artificial intelligence.

The decision to make the film almost a one-hander places a great responsibility on Sackhoff, which she carries well. Though her occasional lapses into stuttering incoherence when she is dying – or is she? - feel like directorial mistake.

So thumbs up for the acting. But definite red flags for the overall narrative and the graphics. Just: don't mention the graphics, which take up far too much of the film's time.

Something quite consequential is going on. Some people are keeping secrets from Mack. And maybe her sister is up to no good. Or perhaps Sterling is the villain of the piece. But none of these possibilities are explored in sufficient detail for the viewer to reach any clear conclusions. And since this narrative takes place for the most part in a single (control) room, intercut with not very clear graphics of sinister happenings on Mars or in outer space, the first half of the film is slow to the point of tedium.

Meanwhile, far too much reliance is placed on those graphics. Which is fine if you are dealing with top-notch state-of-the-art CGI. But for too much of the film, they are quite the opposite. Poor, indistinct or, as in the opening sequence, bordering on the amateur. It isn't a good look, to launch a high-concept sci-fi film with an extended outer space sequence featuring space craft that look as though, at any moment, they are about to engage in a game of Asteroids.

Parallels with 2001 are inevitable. OK, the object, discovered on Mars and of “unknown origin” - for which, read, “alien”- is a cube rather than a monolith. But the HAL/ARTI parallel, right down to Mack crawling round in the innards of ARTI's central server, is palpable. So, too, is the film's resolution, with slightly better special effects and Mack turning outward to meet the ineffable, incomprehensible cosmos.

But at least those confused by 2001 had the book to fall back on. Whereas here, it felt like too many questions were being left unanswered. Perhaps that was the intention of Director, Hasraf Dulull: but if it was, it was an aim too far. If you are going to leave a film unresolved, as this one is, you perhaps need to pose better questions before you do so.

If that all feels negative, that is a shame. There are stretches of this film that are interesting, engaging, well done. Over all, however, it feels like an ambitious project that has fallen short. The result, reviewing the reviewers, is truly Marmite, with many hating it, some absolutely loving it.

I did not dislike it: it was not unwatchable. But it was not well done. 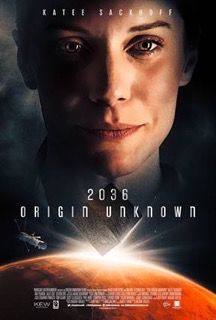 When a scientist receives an “Origin Unknown” signal from Mars, she must investigate from mission control 150 million miles away on Earth.