"Our days are numbered" Nick Cave reminds us in Jane Pollard and Iain Forsyth's stranger than fiction 20,000 Days On Earth as he takes us on a journey to the centre of his world and those who orbit around him.

We begin with an eruption of sound and visuals on dozens of monitors across the screen - resembling an installation by the late "Father of Video Art" Nam June Paik - recounting the reincarnations of Cave in a flash starting with an imagined Day One.

It's 6:59 on a bedside table alarm clock. Cave is already awake before the 7 o'clock alert goes off, getting set to launch himself into his mythical 20,000th day on Earth adventure.

"At the end of the 20th century, I ceased to be a human being," he gives us in voiceover, and "I eat, I write, I watch TV." He speaks about mostly feeling like a cannibal - with his wife Susie, under cover lurking beside him, only arm, shoulder, and hair visible, as his primary victim.

Pollard and Forsyth, who have previously worked with Cave on Bad Seeds videos, turn inner states into inhabitable rooms. What is real and what is unreal is not for the audience to guess. The more you know about a cave, the easier it is to enter.

20,000 Days on Earth lives precisely on mood and ponders ideas of creation. What is the artistic process? What happens on stage for a musician? Time, memory, fear and transformation are the cornerstones for the filmmaker team. They reveal and conceal seamlessly and shift locations and states of mind.

Cave visits a psychoanalyst. Darian Leader is his name and the filmmakers told me that Cave and he never met before they were together on the set. Reinvention is a shuffling of truths and is one of the pillars in this unclassifiable documentary caper. "The real world" is startling, Cave tells us as we discover his Brighton, the way he sees it. "Places choose you," and the "always cold and always rainy" English seaside town picked him.

He speaks how the town "has been forcing itself violently into my songs." The creative process can be the artist raped by the climate. The theme of responsibility threads through the labyrinth of Cave's intimate narratives.

"Songwriting is about counterpoint," he explains in a one minute master class featuring a small child, a Mongolian psychopath, and the need to end up shooting a clown on a bike as a last resort, as his heavy golden rings lay upon the piano.

In the therapy sessions, we, too, get to put things together - me Freud, you Cave. The origins of fascination with white face and dark hair - Kabuki style - and the transformation of his father when explaining the first chapter of Vladimir Nabokov's Lolita to him as a young lad. Cave is open and forthcoming and talks about very personal memories and fears in the fictional therapy office with a big fireplace burning.

"Memory is what we are," and its loss Cave's greatest fear. The tone shifts into a more humorous gear when he confides to us his wife's past advice to him on mixing drug abuse with religion as his daily routine. Susie Cave's presence is never far away as was his father's for him growing up. Re-telling and mythologising of memories bring his songs into the world.

We get to see him working out arrangements with Warren Ellis on their songs Give Us A Kiss, Higgs Boson Blues, Push The Sky Away and Animal X, co-written with Thomas Wydler.

A rehearsal in a cosy and spacious recording studio with his bandmates brings alive a look into what they do. Longtime Cave collaborator and Bad Seeds drummer Thomas Wydler, who isn't heard speaking a word, in full concentration, radiates the essence of a musician at work with his hard, driving, pulsating rhythms. On the floor, we see the soles of Cave and Warren Ellis's pointy shoes waving to and fro like two un-synchronised metronomes or a pair of contented windshield wipers. Is someone taking score?

The magical day includes three car trips with Cave as chauffeur to three very alive ghosts of his past, through the rain. Each conversation contains a splendid surprise, as real as it gets with reactions captured on film. Former Bad Seeds member Blixa Bargeld's face transforms in close-up when a comment about their past recordings goes in an unexpected direction, and so does Cave's when Kylie Minogue's description of him catches him off-guard.

Ray Winstone, who collaborated with Cave by acting in John Hillcoat's The Proposition (written by Cave with an Ellis/Cave score), is the first witness in this Holy Motors trip into the many faces of a man. Cave's Jaguar must have come equipped with a passenger ejector seat option.

"I can't re-invent myself," Cave states and speaks about transformation on stage. Anecdotes about a Nina Simone concert prompt Warren Ellis, over his home-cooked deep purple pasta with eel, to admit that he has a chewing gum relic and a sweaty towel from her historical London Meltdown performance where Cave introduced her. Ellis is seen living in a cottage he might as well share with the seven dwarfs, which is a total construct by the filmmakers. When you think you get an insight in this riddle of a movie, you possibly might have been purposefully led astray.

Another rehearsal includes a young French children's choir. Cave is not happy yet with the sounds coming from the little angelic faces all equipped with headphones. Ellis instructs them in French to sing Push The Sky Away as three words. Push the skyaway - no pause. Again, Pollard and Forsyth capture a terrific and funny moment, as the kids, obviously intimidated by it all, leave an extra wide gap between the words.

"I love the feeling of a song before you understand it," Cave chases fleeting moments, something he has in common with the filmmakers. Understanding is the killer of magic.

Their decisions are unique and the diversity of angles from where they approach their subject is impressive. The staged Cave archives with real material lead to a narrative excursion to his time in West Berlin with a Henry Darger-like neighbor whose collection of nativity arcana underwent a transformation through light.

Then there was the weather and Cave's weather diaries, and plenty of scrapbooks, and love. In a fascinating avalanche of desire from Jean Simmons' nose ring to Tinker Bell trapped in a drawer, tabloid girls and dreams of Jeannie, we rest on his favorite image of his wife.

A family moment with the Cavemen, his twin sons Arthur and Earl having pizza and watching, with mock horror, a gangster movie on TV, reads like a tongue-in cheek commentary on documentary conventions. It is also a lovely moment of bonding.

At the Sydney Opera House we come full circle with a performance by Nick Cave and the Bad Seeds with string accompaniment and the French children's chorus giving their all as images of his past reincarnations cut in and out.

With a stroll on a very bright green Brighton lawn, the sun sets on the epic day when Nick Cave longingly looks out to sea.

Life flashing in front of your eyes before death is constructed in reverse, leading to the birth of 20,000 Days on Earth. The buoyant balance of opposites renders Jane Pollard and Iain Forsyth's portrait supreme. 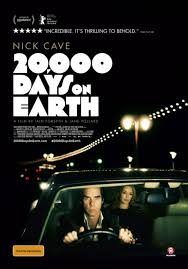 An intimate portrait of Nick Cave.

Where time begins, where space ends

Dogs In Space
One More Time With Feeling