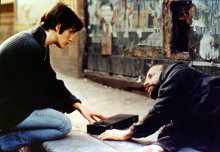 Celebrating its 13th edition in 2016, the festival will screen classics including opening film Three Colours: Blue - with Juliette Binoche attending the festival. They will present a lifetime achievement award to Károly Makk, screening Another Way and Love and hosting a masterclass with the Hungarian filmmaker. Nineteen films will compete in the international competition.

Under Construction
A modern Muslim woman struggles to find herself in the sprawl of urban Bangladesh.

It's Not The Time Of My Life
Family tensions rise after an unexpected visit.

That Trip We Took With Dad
A Romanian-German family make a journey from Arad in Romania to the German Democratic Republic.

Equals
A futuristic love story set in a world where emotions have been eradicated but where a genetic glitch means some people can still fall in love.

Aquarius
A retired music critic is the last resident of a building targeted by developers - she becomes engaged in a cold war of sorts with the company.

Nightlife
The lives of a wealthy married couple radically change in an instant. While the husband is in critical condition after an accident that occurred under strange circumstances, the wife tries to understand the situation and to salvage what she can.

Certain Women
Triptych of stories about women in small-town America.

Elle
A successful video game boss aims to track down her attacker after a home invasion.

Train To Busan
A train journey is complicated by the presence of the living dead.

Elvis & Nixon
Elvis goes to the White House to ask the President to make him a Federal Agent At Large.
A-Z of Miskolc International Film Festival 2016 reviews >>>

Huppert - the actress who knows no fear
Elle star on working with Verhoeven, awards and the gift of confidence
Inside and out
Kleber Mendonça Filho on Aquarius and a changing world.
Round about midnight
Michael Shannon on Midnight Special and expanding his horizons.
Beefing up reality
Gabriel Mascaro on the mixture of the surreal and the actual in Neon Bull.
Venice 2015: The state of independents
Looking For Grace, The Daughter, Equals, The Childhood Of A Leader
Romero - master of the macabre
Veteran director on zombies, religion and genocide.
Plight of the living dead
As Diary Of The Dead is released on DVD read our exclusive interview with George A Romero about zombies, the perils of the internet and a Sound Of Music remake.