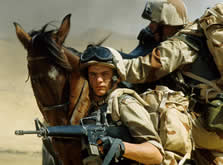 An exploration of war and those left behind, Flanders will screen

The 27th Cambridge Film Festival runs from July 5 to 15. It opens with the UK Premiere of Lady Chatterley - which scooped a host of Cesar awards in its native France. The screening is part of the festival's New French Cinema strand, which also features Cannes Jury Prize winner Flanders

Other strands include New German Cinema, FrightFest, Cinecology - The Environment On Film as well as a series of revivals and open air screenings, including a free outdoor showing of the Christopher Lee version of Dracula. Among the other highlights are a screening of Sundance audience hit Waitress and the UK premiere of the excellent Clubland. The festival will wrap up on July 15 with Lasse Hallstrom's latest The Hoax.

Plus, from July 6 to 15, the Cambridge Film Festival is going to London. For the first time ever, the Curzon Soho will host a selection of the films.

Casino Royale
James Bond earns his double zero status and relaxes at the poker table with a mass murderer.

Paprika
A dream machine is stolen, leading to people being unable to distinguish reality from fiction.

Tales From Earthsea
A young prince is caught up in a titanic struggle of sorcerers.

Azur & Asmar: The Princes' Quest
Two young men with a shared past set out to try and rescue an imprisoned Djinn fairy, learning about themselves in the process.

Ghosts Of Cité Soleil
A look at the lives and origins of the young gangsters who control Haiti's shanty towns.

Evan Almighty
A US congressman is ordered by God to build an ark in preparation for a great flood. Out to own on DVD from November 26.

As You Like It
A banished duke and a young nobleman, Orlando, seek refuge in the Forest of Arden. The duke's daughter, in love with Orlando, pursues him disguised as a boy and devises a test for his love.

The Singer
A nightclub singer falls in love with a much younger woman.

Gypsy Caravan: When The Road Bends
Documentary following a group of Roma musicians from diverse backgrounds who get together to tour the US.
A-Z of Cambridge Film Festival 2007 reviews >>>